My Top Ten (or Five, actually, or maybe Six...): Tools of the Trade 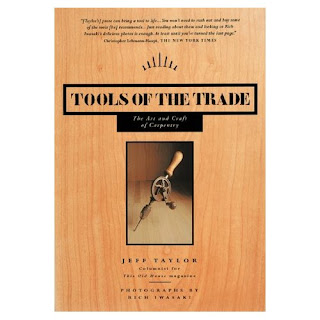 There are dozens of books about tools. What I love about Jeff Taylor's Tools of the Trade: The Art and Craft of Carpentry

is that tools are just the starting point. Jeff is a born story-teller. The chapter on hammers, for example, isn't really about hammers. It's about, as the subtitle states, "the art and craft of carpentry." It's about his first job working for an old carpenter named Swanee. It's about Jeff's raw naivete and Swanee's years of accumulated knowledge and wisdom. It's about attitude, which is the most important tool of all.

If you've read or listened to my novel Clear Heart, you might remember Abe, the Princeton preppie, being trained by Steamboat, the big old quiet guy, with lessons about mucking in concrete and learning to "work smarter, not harder." Well, Jeff Taylor had an apprenticeship like that, working for Swanee.

From Jeff Taylor and Swanee, I learned something new about hammers, too: "Swanee showed me how he had bored out the bottom of his wooden handle almost to the head and filled it with castor oil, which bled out into the wood to make a microscopic slick on the surface; hence, fewer blisters. By capping the opening with beeswax, my mentor could dip screw threads to glide them into pilot holes."

The book imparts a lot of wisdom with self-deprecating humor. I particularly appreciate that he devotes equal attention to the tools of framing and finish carpentry as well as the workshop tools used by furniture and cabinet makers.

No power tools, though. Nobody seems to have any affection for power tools, except me. I may have to write my own book about that. In a way, Clear Heart was a start: A Duo-Fast nailgun named Debbie the Doofus was a central character, along with a Hitachi H65 forty-pound demolition hammer, several belt sanders including the legendary Porter-Cable 504, and ... Well, don't get me started. Oh, and pickup trucks, too! But, again, don't get me started...
Posted by Joe Cottonwood at 4:24 PM