See the giveaway details at Goodreads.

Enter to win
Posted by Joe Cottonwood at 5:12 PM 4 comments: 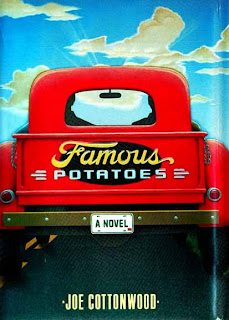 Back in the 1970s I published a vagabonding novel called Famous Potatoes. I used to get letters and still get email now and then that all say the same thing: somebody handed me this beat-up copy of Famous Potatoes, or I found it on a bookshelf in a commune in Nicaragua, or somebody in the Peace Corps left this in my hut in Africa, and so on…  I think I must've sold about a dozen copies total which somehow have circulated all over the planet to be read by thousands of people. Not a profitable way to make a living, but great karma which will profit me someday.

Last week I got another of those emails. This time, It was from a man named Gene who had borrowed a copy of Famous Potatoes from his college friend in 1979, and then loaned his borrowed copy to, Gene writes, "a sixties holdover character who lived out of his car and in his lingering drugged out fog, at some point this guy vanishing and the friend's copy of Famous Potatoes disappearing with him. This struck me as a karmically fitting fate for Famous Potatoes but it struck my more literal-minded  friend as me just having lost his copy of the book."

Ever since, apparently, Gene's friend has been giving him good-natured hell about losing the book in one of those tropes that run through a long friendship. After all these years, Gene found me on Facebook and wrote to me asking if there were a way to get another copy, so he could finally give it back to his friend. So I mailed an old beat-up copy of mine directly to the friend in New Jersey with the inscription: "Now stop giving Gene a hard time about this."

Last week, 34 years after loaning the book, it arrived in the mailbox of the unsuspecting friend. He immediately called Gene and said, "Holy shit.  You are a man of your word.  I’m sorry I ever doubted you.  This is absolutely awesome.  This is just unreal.  Thank you.”  Followed by: “How did you manage to copy Joe’s handwriting and make it look so real and get it sent out from California?”

Posted by Joe Cottonwood at 1:00 PM No comments: