He still goes out of his way every time to ask
how I’m doing: he is the tree whispering through

the cracked hospital window, the shiver of white
narcissus, the breeze lifting the skirt of the nurse

opening my door. He is the song in my head
that doesn’t stop at night, the way curious medicine

wanders my blood--I no longer go out of my way to
picture the mound of earth dug just my size.

like the lid of a music box that’s been wanting
quiet for years.  When I start to die, this is

how it will be:  no terrible music, no one taking
my place, his footsteps in silence carrying on.

From the journal of Ann Emerson:

there may not be all the time i’d prefer left to see the rest of the world or even to improve my poetry much, but there is plenty enough left to deepen my relationship to life.  further,  i am discovering that to delay doing this just because my health isn’t optimal is more than an excuse; it’s a sin.

and, friend, i’m warning you, that is the only reason why you are here too.

Ann's journal is ongoing at CaringBridge.  It is open to the public.  Make a visit.  Say hello.

Posted by Joe Cottonwood at 1:03 PM No comments:

(I wrote this article for the La Honda Voice newspaper.  Oddly, some people on this planet don't subscribe to the Voice, so I thought I'd repost an expanded version here with some additional comments.)

Not the Last
by Ann Emerson
-- with gratitude to Jane Hirshfield

about horses vanishing in the West.
Stanford Cancer Center.  The hills behind the

research lab are stitched tight with barbed wire.
Things now are just as they said it would be:

steel devices and PKC412.
End-stage: I am a feral horse untouched

by human hands, lithe as grasses on
high plains.  Pink gasps of lungs for air.

families of the dead.  Here, in this closed
room, I grow restless pricked with silver

hooks and tools.  I am not sad no one
has figured me out and I do not wonder why things

turn out as they do: my sky pouring gold through
the window, the crack of wind setting me free.

You may not have met Ann Emerson, though she's been living in La Honda for a couple of years.  "I'm kind of a hermit," she says.

Four and a half years ago, Ann learned that she has a rare form of cancer called malignant mastocytosis.  She was given 3 to 5 years to live.  "This prognosis was very good," she says, "because now I know there's an end in sight.  I'm at heart very lazy.  I need to evolve.  Now there's a compression of time, an intensity.  I'm more selective about who I spend my time with."

Mostly, she spends her time with two old cats at her little cabin in the redwoods in a chair overlooking San Gregorio Creek, where she writes poetry.  She calls her home Lazy Eye Ranch in honor of a lazy-eyed cat.

Besides writing poetry, Ann runs something of a hospice for old cats, usually blind ones.  "I've always worked with dying animals," she says.  Currently she cares for two of them, Blinky (one-eyed) and Babar.  In boxes by the window are the ashes of 3 cats who have passed on: Wabisabi, Flossy, and Piccola.  "When I die," Ann says, "I want my ashes mixed with theirs."

Morbid?  Depressing?  Not at all.  Spending time with Ann is to be embraced by the clarity of her life, her spirit, all of which shines through her poems.

Born in Oakland in 1954, Ann grew up in a not-so-good neighborhood in Richmond until 1968 when it was destroyed in the rioting after the assassination of Martin Luther King.  Her father was a professor of medieval musicology; her mother was a child prodigy concert pianist who at age 8 appeared in Steinway ads, but who gave it all up, as was expected in the 1950's, to raise Ann.  Her mother became a reference librarian in the Richmond Library, where Ann would hang out and read everything, first children's books and then moving to the adult section.

Ann majored in Physiology at U.C. Berkeley and wanted to be a veterinarian, but the Dean of the Vet School at U.C. Davis "chewed me out, called me a hippie (I had hair down to my butt) and told me he wouldn't admit me because I was only going to drop out and have babies."  This was 1975.

So instead of veterinary science, Ann studied literature in graduate school but only as an academic pursuit, never as a creative writer.  In those days (and perhaps still) there was a strict boundary: You were either academic or creative, never combined.

At age 27 Ann worked with Mother Teresa in Calcutta.  "She was a pistol," Ann says.  "A tough cookie.  A down to earth, gritty woman.  She took no personal interest.  To her, all that matters is your service to others."   On a wall of Ann’s cabin hang the words:


Ann worked for 20 years in the California Employment Training Panel, an agency started by Governor Jerry Brown to retrain workers.  For 15 of those years Ann visited employers, meeting CEO's, helping workers from the cubicles of Silicon Valley to the hot fields of broccoli farmers.  What she learned, she says, is that "American workers work really hard."
Finally, with her illness, Ann had to quit.  She can't go more than a few hours without sleep.  With the clarity coming of a life-threatening illness (Ann, in her Buddhist group, doesn't use the word "terminal"), Ann came to see many of her acquaintances as shallow, concerned with shopping and shoes.  She gave up her life in San Carlos and moved to a little cabin in the redwoods.  Meanwhile, she joined an experimental writing class offered to cancer patients at Stanford.  Under teacher Sharon Bray, she discovered she had a calling as a poet.  At last she is a creator, not an academic.  And she is blossoming.  Now she meets with Ellen Bass, a Santa Cruz poet, and had an inspiring encounter with the poet Jane Hirshfield.

Ann has turned to poetry with a passion.  "You go for broke," she says.  Her lessons from Mother Teresa ("All that matters is your service to others"), from broccoli farmers ("American workers work really hard"), and from her own trials with chemo and blood transfusions and all the medical technology that Stanford can bring to bear, have taught her this: "It's not what you do but how you do it.  You do it with all your heart and all your passion."

And this: "Getting cancer was the best thing that ever happened to me." 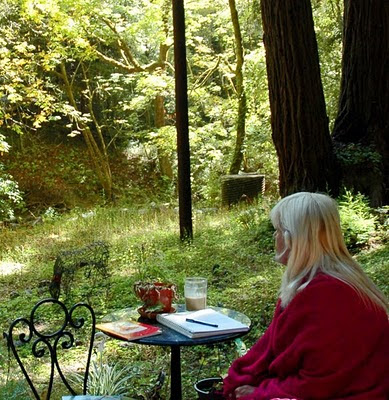 The finished poem is perfect, more than perfect--it is devastating and gorgeous and true.
Thank you for this story--and Ann, thank you, for your presence, your words, and your teaching--

Ann keeps a journal at the wonderful website CaringBridge.

Posted by Joe Cottonwood at 9:03 AM No comments: