I make my home in La Honda, California.  My friend, the poet Terry Adams, also makes his home in La Honda. Terry's home is the cabin where Ken Kesey hung out with the Merry Pranksters and the Hells Angels, where Kesey conceived of the Acid Tests, and from which Kesey launched the bus "Further."  Terry bought the cabin directly from Kesey after the place had been neglected, abandoned, vandalized, and—the final insult—flooded by the rampaging La Honda Creek, which knocked the cabin off its foundation and filled it with mud.

With a respect bordering on reverence, Terry rebuilt the cabin, maintaining as much of the original structure (and psychedelic interior paint) as possible.

Some of the original boards had lost their structural integrity and couldn't be re-used in the cabin. Sliced, though, they make a great bookmark.  With the help of James Adams (no relation to Terry), here are some  samples. 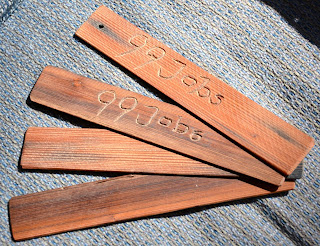 I've got lumber from Ken Kesey's original floor and from his old water tank.  Who knows what kinds of Kool-Aid splashed onto the floorboards to be absorbed into the wood fibers?  And as for what was in that water tank, I can only speculate. 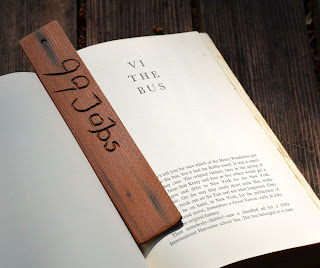 Warning: if you receive one of these bookmarks, DO NOT CUT IT INTO TABS AND INGEST.  I am not responsible if you feel a sudden urge to rip off your clothes and paint your body with paisley designs. 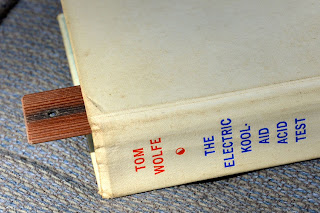 The tabs—er, bookmarks—will be offered as incentive rewards in my upcoming 99 Jobs  Kickstarter campaign.

Posted by Joe Cottonwood at 6:32 PM No comments: 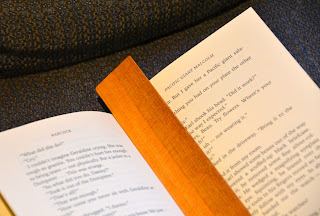 For my upcoming Kickstarter campaign, I was brainstorming with James Adams, La Honda's master wood craftsman, about incentive rewards that I could offer to people who make Kickstarter donations.  We were talking in his woodshop, setting our beer bottles on top of his table saw, when I had the idea: "How thin can you cut a piece of wood on that table saw?  Could we make a bookmark?"

James cut some samples.  A bit of sanding, a bit of finish, an experiment with freehand writing using a router, and — wow: 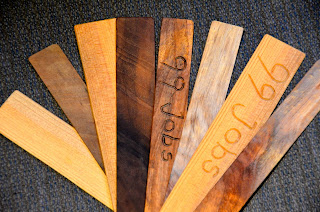 James has salvaged all kinds of local La Honda timber.  When a tree falls, James is there.  He has black acacia, dark walnut, fir, maple, redwood (of course).  Maybe that redwood came from Ken Kesey's old cabin.  James even has a cypress tree from Neil Young's ranch.

So I'll be offering bookmarks as incentive rewards on Kickstarter, starting next week.  Put a little lumber between your pages.  Own a piece of legendary La Honda timber. 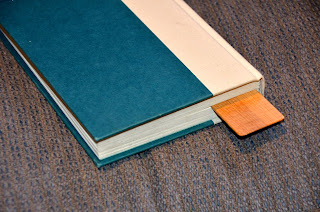 Posted by Joe Cottonwood at 8:05 AM No comments:

The book is nearly written.  I've winnowed the jobs down to about 113, so I still need to winnow some more.  99 Jobs is a good title; 113 Jobs is not.  I'm rewriting and adding material—some of those original posts were badly written, or omitted details, or simply missed the point.

After extended agonizing I'm getting comfortable with the title 99 Jobs: Blood Sweat and Houses.  Then immediately in the jacket copy I hope people will read this:


I repair homes. With each job I enter somebody’s life. Here are 99 "tool belt tales” about good hard work and the people I’ve met. 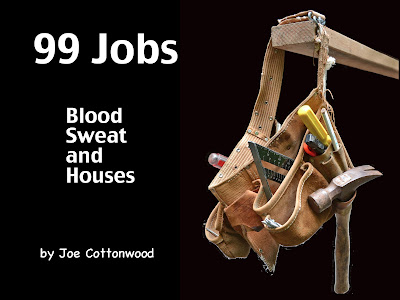 Many people are telling me they prefer printed books to ebooks.  I do, too, but they cost money to set up.  I'll be launching a Kickstarter campaign in August.  The campaign will end on Labor Day, which seems an appropriate date.  It's basically a way to ask people to pre-order the book.  They'll receive advance copies, and I'll have some advance funding.

My goals are modest.  At a minimum, I hope to fund the cost of hiring a professional editor and a good book designer.  If I can raise more than the minimum, it can pay for a tiny publicity campaign and maybe even a low-budget book tour.

Posted by Joe Cottonwood at 7:39 PM No comments:

Writing a song is like having a child.  In spite of all your nurturing, that child will grow up in ways that surprise you to become an independent soul.

Back around 1973, one of the first songs I ever wrote was called "Oobie Doobie Doo."  My friend Tony Juliano liked its essential weirdness, modified it, and started including it in the repertoire of Johnny's Dance Band, his popular Philadelphia rock group.

Now, forty years later, Tony and his Johnny's Dance Band are having a revival.  They're performing again in the Philly area and one of their most popular songs is "Oobie Doobie Doo."  Their version is highly satiric and includes a tuba.  Very silly, great fun.  Tony has always been a terrific stage performer.

If you had told me back in 1973 that "Oobie Doobie Doo" would be climbing the Hit Parade forty years later, I'd have recommended drug rehab.

Honestly I had no idea the song would turn out like that.


Posted by Joe Cottonwood at 9:19 AM No comments: