Famous Potatoes is back! 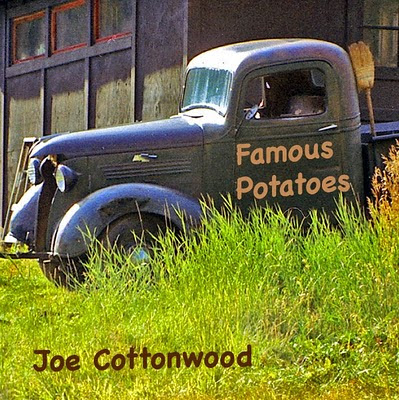 Almost 40 years ago, I wrote a novel called Famous Potatoes. At the time I was making my living as a hippie handyman. A woman hired me to repair her shower. I botched it. What should have been a half day job turned into a 3 day nightmare in which the woman's house went without water while I had to call in help from my neighbor and good hippie friend, Sonny Hoppas, who was a carpenter not a plumber, who in turn called in help from a contractor friend who was also a carpenter not a plumber. (Lesson #1: Don't hire hippie plumbers.)

Finally we got the shower repaired. Meanwhile I got to chatting with the woman's hippie boyfriend, John Daniel, who as it turned out had a small press called No Dead Lines. We chatted a lot. There may have been marijuana involved. Anyway, he became interested in my novel and wanted to edit it—for free. I was delighted. 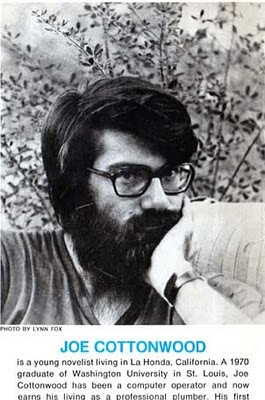 I was living at the time in a hippie compound on San Francisquito Creek near the Stanford Linear Accelerator Center. My neighbor in the compound was an artist, a gorgeous tall raven-haired Amazon of a woman who shot a great game of pool, Linda Goodman, who wanted to go into the book-designing business. She became interested in helping to design Famous Potatoes—for free—as a showpiece for her skill. I was delighted. She knew a talented young illustrator named Ed Wong who lived behind an orchard in Sunnyvale (in those days, Sunnyvale had orchards). I'd have to pay him, but he was worth it. With Linda's supervision, Ed came up with a set of illustrations. I've always like illustrated novels and was willing to pay out of my own pocket for something I believe in. Eventually I hired Linda to do the layout and paste-up, and she found a cut-rate typesetter living in Santa Cruz (who I never met, but I always imagined her as a laid-back surfer hippie with typesetting skills - she liked to type editorial comments about the characters in the margins of the galleys like "Serves him right!" or "Good for her.").

Linda's boyfriend, Michael Riordan, was a nuclear physicist at SLAC who had written a solar energy book and wanted to be a literary agent. He wanted to shop my novel around. I was delighted.

John Daniel wanted to include Famous Potatoes in his No Dead Lines catalog but couldn't afford to print it. So we agreed that I would self-publish, using No Dead Lines as the listed publisher, and he would help distribute it. 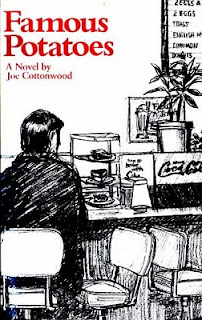 The day of the print run, when the novel was literally on the printing press, I got a call from Michael saying he'd sold Famous Potatoes to a New York publisher, and they would pay me a $10,000 advance on the condition that I did not sell any copies of the No Dead Lines edition which, at that exact moment, was pouring out of a printing press in East Palo Alto. I could have called the printing plant and shouted "Stop the press!" but I still would have owed them $3000 for the print run after already spending $1000 for the hippie typesetter and something, maybe $1000 to Linda for layout and paste-up. So I let it run. $10,000 minus $3,000 for printing minus $1000 for typesetter minus $1000 for Michael as agent minus maybe $1000 to Linda for layout and paste-up was still a profit. Minus I-forget-how-much for Ed Wong was still a profit—barely. So the No Dead Lines edition went out of print before it even finished printing. Probably the shortest book run in history. A few copies got out there anyway. You can still find them on the internet used book market.

The New York publisher was Seymour Lawrence, the same man who published Kurt Vonnegut and Richard Brautigan. I was in good hands. He hired Ed Wong for a new set of illustrations and as I recall he hired Linda Goodman to supervise. Poor Seymour couldn't take his eyes off Linda, she was so lovely. For a book jacket they hired Heart Arts. 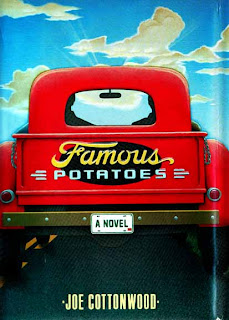 Famous Potatoes got great reviews in books and magazines all over the USA and, eventually, all over the world—except the New York Times, which loathed it. France, Germany, Italy, Japan, Israel, Sweden, Netherlands—the book did well. The snobbish disapproval of the New York Times, plus the subject matter, caused the book to become known as an underground novel. People started calling it an "underground classic."

And then eventually the world moved on, and the book (in the English language, at least) went out of print. For 30 years. Until now.

went on to write several books himself on solar energy and nuclear physics. Ed Wong is now Edward Wong-Ligda and has his own cult following (they collect "Edisms" on Facebook). Sonny Hoppas, last I saw him, lived on a sailboat and still worked as a carpenter. John Daniel became Mellow Fellow (that was his title, meaning Director of Mellowness) at a hippie hot spring in northern California.

The moral of this story is that if you want to publish a novel, follow these simple steps:
1) Botch plumbing job.
2) Hire neophyte book designer.
3) Hire neophyte literary agent with a background in nuclear physics.
4) Hire a Mellow Fellow as editor.
5) Hire a neophyte illustrator.
6) Hire, sight unseen, an opinionated surfer hippie chick typesetter who does good work, cheap.
7) Trust the hippie network.
8) Spend your life savings on self-publishing.
9) Sign contract with prestigious New York publisher.

Oh. And one more step:
10) Thirty or forty years later, you'll still be a struggling author.
Posted by Joe Cottonwood at 1:50 PM 6 comments: 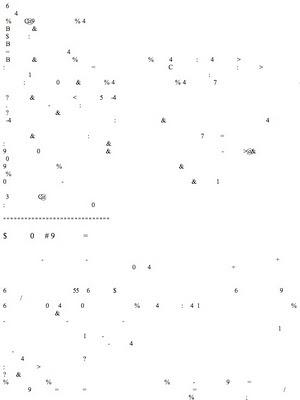 So far, three of my books are available as ebooks on Smashwords.com. Right now I'm preparing to upload a fourth. So I thought I'd check the formatting of my previous books to see if I could conform to the same style. When I checked, here on the left is what one of them looked like.

Here on the right is what it used to look like. 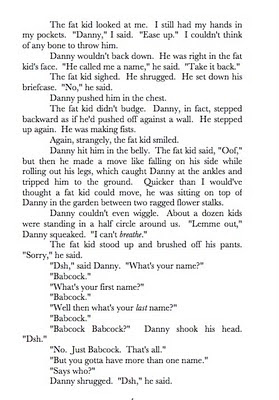 All I know is I'm working real hard to make my books available at incredibly cheap prices as ebooks, and then the technology gets "upgraded" and everything turns into garbage. Sheesh.

If anybody reading this blog has downloaded one of my ebooks and is having any problem viewing it, please contact me.

Smashwords converts my manuscript into all the various ebook formats including PDF. What I am displaying here are PDF pages that have somehow become unreadable. I can't check the EPUB and MOBI or any of those proprietary files because I don't have a Kindle or any of those nice reading devices. So if you have one, and if my books are unreadable, please let me know. Otherwise I'll never find out that Smashwords needs to fix them. And you'll never get to read them.

In this case, I think the problem is that one of Apple's routine system upgrades has changed the Preview program, which is how I view PDF documents. The same document still looks good when viewed with Adobe Reader. It used to look good in Preview, too, but now it doesn't.

I'm sure Kindle and all those other reading systems upgrade their systems periodically. What happens to people with old files?
Posted by Joe Cottonwood at 5:07 PM No comments: 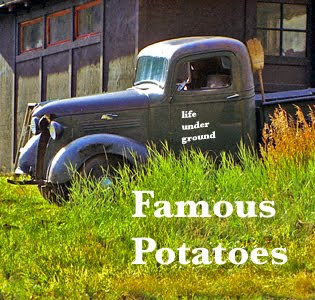 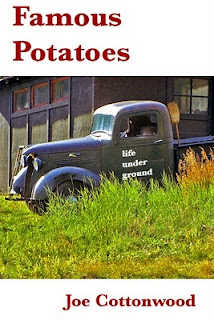 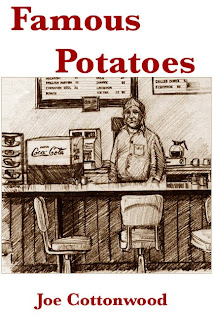 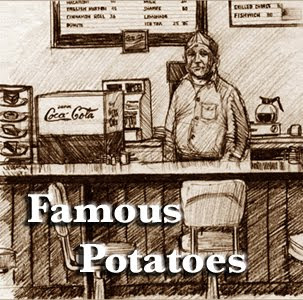 What do you like? I'm considering two different designs for the new release of my old book Famous Potatoes. Each design comes in two versions, square and rectangular. The square version will be on the podcast, the rectangle will be on the e-book. There will be no new printed book - plenty of them are still circulating in the used book market.

Here are some covers from the old printed books. The tailgate cover won a National Book Award as best cover design of the year. Unfortunately, I don't have the rights for it.

One problem is already obvious. I need to draw a border around the white spaces. I'll fix that.

Posted by Joe Cottonwood at 11:35 AM No comments: 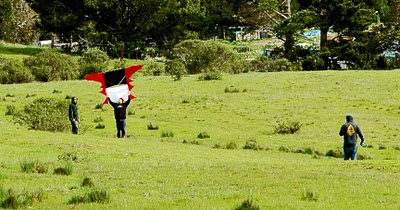 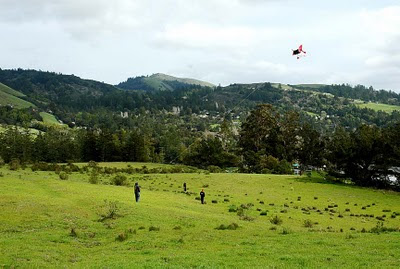 But we live in a big world. 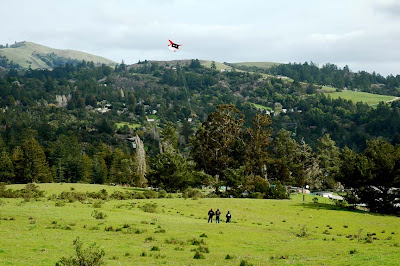 A blustery day in La Honda.
Posted by Joe Cottonwood at 8:36 PM 1 comment: 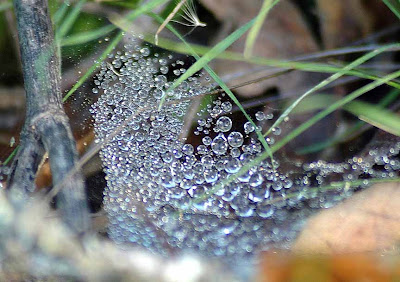 When the fog lifts and the sun starts shining in our hills, drops of water hang suspended in spiderwebs.
Posted by Joe Cottonwood at 12:09 PM 2 comments: 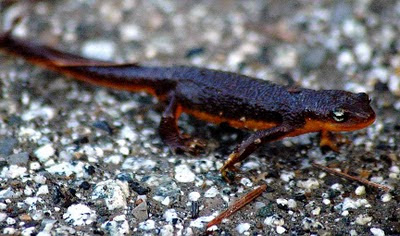 In the rainy season (which is now) these guys are meandering all over the trails in La Honda. They crawl on land as if they were in water - swimming freestyle. They eat slugs, among other things, and since we have an excess of slugs in the redwoods, newts are welcome. Plus, they look so goofy and friendly. 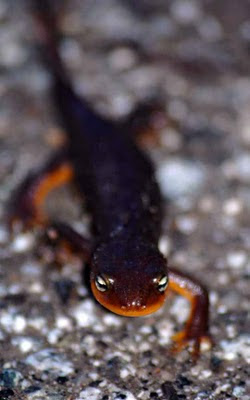 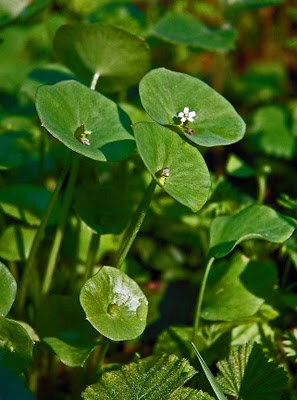 You can eat these if you catch them before they flower. Actually, you can eat them after they flower, too, but they don't taste as good. They grow all along the trails and roadsides in La Honda. My kids used to gather them, and they make a lovely salad - sweet and fresh. During the gold rush the forty-niners appreciated them. Fresh food was always the real California gold. 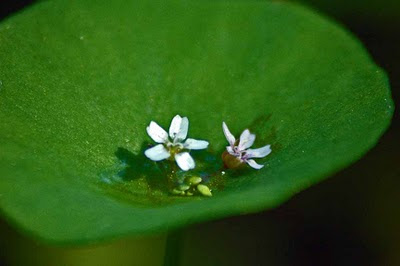 Claytonia perfoliata of the Purslane family (Portulacaceae)
Posted by Joe Cottonwood at 7:19 PM No comments: 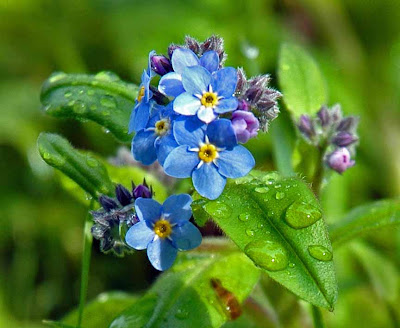 They're late this year in La Honda. Something about the climate wasn't to their liking. But a misty fog clears, and they're here at last, in abundance. 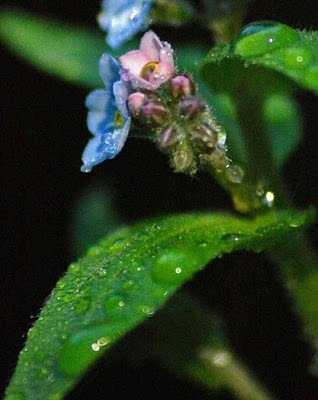 It always fascinates me how the buds are pink, but the flowers quickly turn to that rich blue as they are exposed to the light. Occasionally, I see one that remained pink (always in a shadow). Then with more exposure, the deep blue fades to a pale shade.