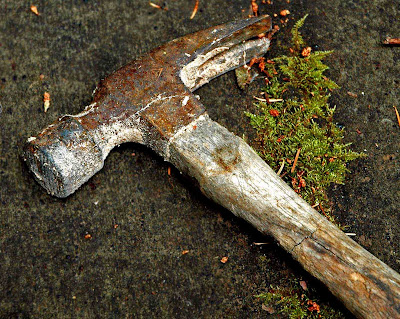 James Adams - cabinet maker, good man, and beloved town crank - gave this hammer to me. It's a 32 ounce framer and was used to build Daly City back in the 1950's. The handle is cracked with age, and a good whack would probably break it. Perhaps that's why my dog Dakota is viewing it with suspicion. There's engraving on the head which I can't quite make out, but it ends in TTO. Does anybody know what brand that is? 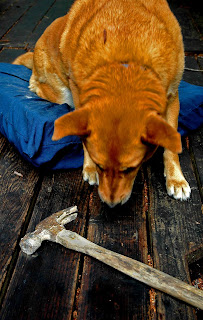 You don't see many 32 ounce hammers these days. A finish hammer is 16 ounces, a framer is usually 22 ounces, and for sustained nailing most likely you'd use a pneumatic nailer instead. I like to think about the places this old hammer has been, the houses it's built, the tool belts it's hung on, the forearms it's tested.
Posted by Joe Cottonwood at 4:30 PM No comments:

Excuse me, but I'm feeling pretty darn good about this review of Clear Heart on the Time Well Wasted web site.

"... endearing, meaningful and memorable... I was completely hooked... Clear Heart is among the chosen few podcasts that have earned permanent placement on my hard drive and in my playlists... Please, take a listen. You’ll learn a bit about love, life, and even carpentry."
Posted by Joe Cottonwood at 11:30 AM 3 comments:

Eight weeks old, a purebred Havanese, he arrived late at night in a crate at the San Jose airport. In the baggage room I approached the cage and offered my hand. Immediately a tiny tongue, warm and wet, slipped through the mesh of the crate and began licking my fingers. For both of us, love at first sight. 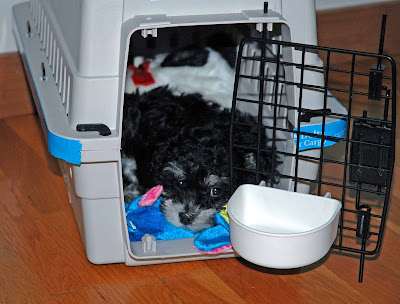 We brought him home and introduced him to Dakota, our 75 pound mongrel. At first they didn’t know what to make of each other. 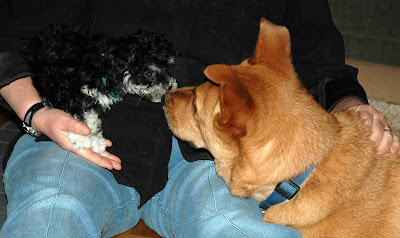 Soon, they were playing. Dakota tried to show who was boss. 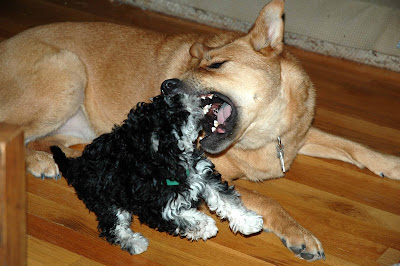 But in canine society, there is a concept called “puppy privilege,” and quickly the roles reversed. 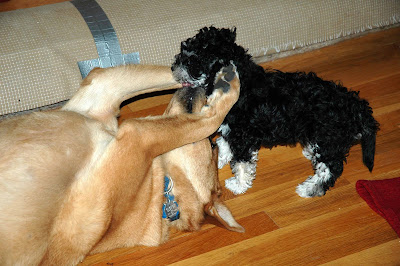 We named him Arno because his white beard and dark hair reminded us of our beloved Uncle Arno Sternglass. Much to our relief Uncle Arno, upon learning we’d named a dog after him, was delighted and honored.

We bought puppy Arno a bed, and he embraced it instantly. 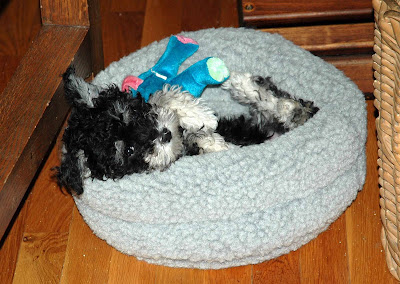 Arno had an amazing bounce.

He fit in small spaces. 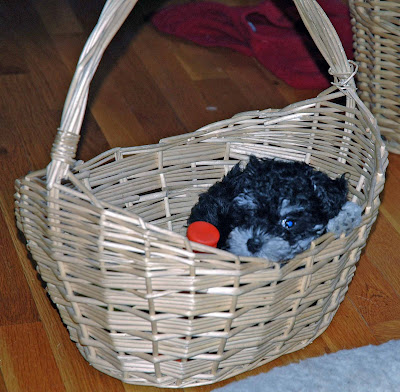 He liked surfing the net. Sometimes when I went out, I’d come home to find that my computer was running with the e-mail window open. If you received an odd message from my address, possibly an email asking for bacon and bones, hey, it wasn’t really from me. 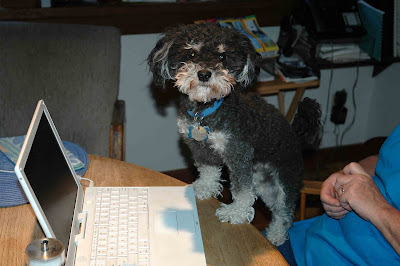 We’d hike for miles in the La Honda watershed. 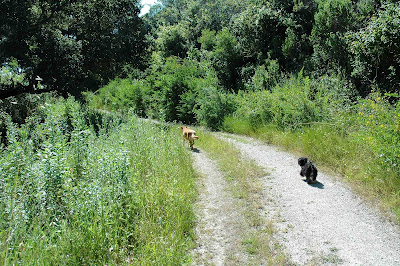 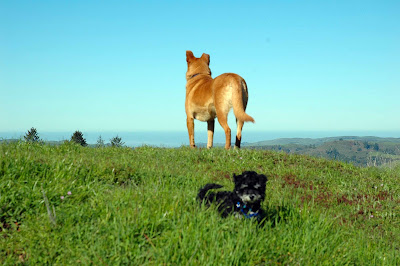 Arno remained good friends with his sister Butzie, who would visit every summer and, as sisters do, would remind him of how ungroomed and basically uncouth he was in her opinion.

Another good friend was cousin Gonzo: 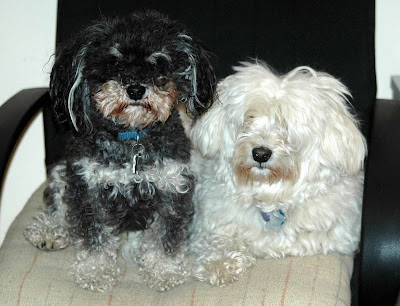 Arno's attitude-to-size ratio was extremely high. He would boss Dakota unmercifully, steal her rawhide bones, and nip her jowls. He would prance up to giant dogs and try to dominate them, then run behind Dakota if they snapped at him. He had strong opinions on practically every subject: where we should walk, when we should wake up, when we should go to bed, who we should talk to. 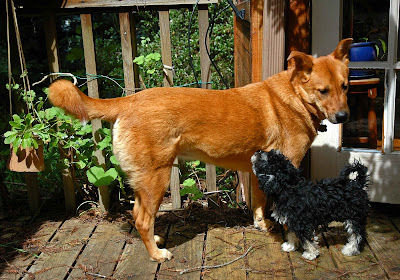 Tuesday, at age three and a half, Arno was hit by a car. We buried him in our yard on a high spot - he always preferred the highest perch. Tears are spilling on my keyboard. Every day he brought joy to our lives. When I lay down, he would curl up on my belly and sleep. He bounced like a basketball. He hectored Dakota and took outrageous advantage of her good nature. He was the most opinionated dog I ever met. He was a city breed, a lap-dog breed, raised in the country, happy in the forest and hills and creeks of La Honda. Sadly it was the city that killed him.

Every day he made us laugh.

We miss you, buddy. We’ll never forget you. 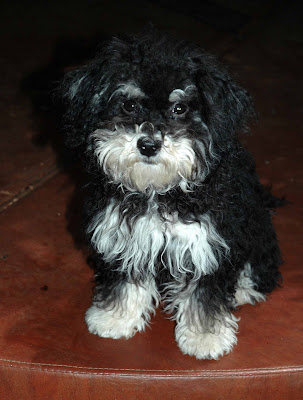 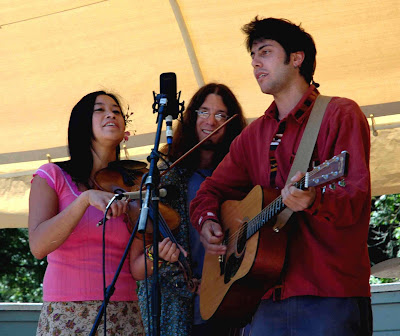 Five Dollar Suit played at the La Honda Faire on Sunday. They were missing Jesse, their mandolin player who is at this moment in Brazil, poor guy, so as Will said they were running a discount today: Three Seventy-Five Suit. They played "I am a Carpenter," which I feature in my podcast of Clear Heart, only they call the song "Walking Home." They also played a song that I wrote 30 years ago called "Leonard and Clyde." Since they have honored me by playing my lyrics, I want to honor them with a picture in this blog. Mayumi Urgino on fiddle, Matt Henry Cunitz on stand-up bass, Will Fourt on guitar. They have great original material and a nice selection of traditional tunes. Sweet songs on a sunny Sunday in La Honda.

You can catch them at the San Francisco Free Folk Festival on June 21 at 3 PM.
Posted by Joe Cottonwood at 2:45 PM No comments: 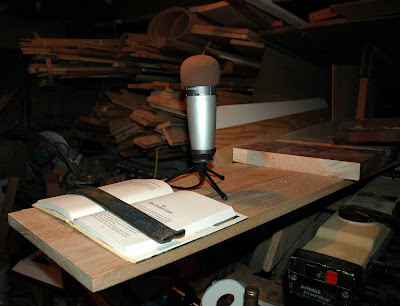 For the curious, here's an uncensored view of the recording studio for my podcasts. It's my basement woodshop. That's a Samson mic standing on a plank of oak. A pry bar is holding the book open (currently I'm recording Boone Barnaby). In the background is a Makita chop saw and a can of Benjamin Moore paint. At the bottom you can see the arm of my DeWalt radial arm saw, a roll of paper towels, and the top of a wine bottle (Two Buck Chuck Cabernet Sauvignon).
Posted by Joe Cottonwood at 3:50 PM No comments:

Writing about my past, I use some of the people I've known as models. Just as a painter converts a live model into something quite different on canvas, I convert live memories into something new and independent on the page. The first step is to change the name. With that change, I gain the freedom to create.

Please help me. Right now I need to name two female grad students. One is in History, one is in English. At Stanford. They rent a scruffy little bungalow in a bad neighborhood. They appear perfectly normal on the outside except for one thing: They share the use of a big old white 1963 Cadillac. What are their (fictional) names?

And if I choose your suggested pair of names, what can I offer you as a prize?
Posted by Joe Cottonwood at 11:03 AM 1 comment: