Today we began cutting bookmarks. On a table saw James Adams ripped slivers from a redwood 2x6 that used to be part of Ken Kesey's water tank. The wood is clear heart, vertical grain with mineralization stains (of heaven knows what chemicals). I took some photos as he began. 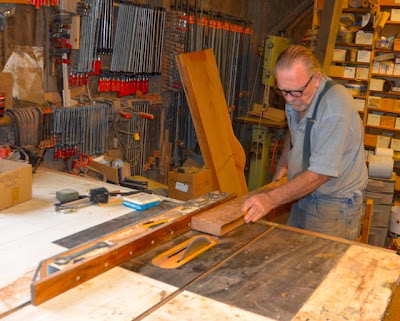 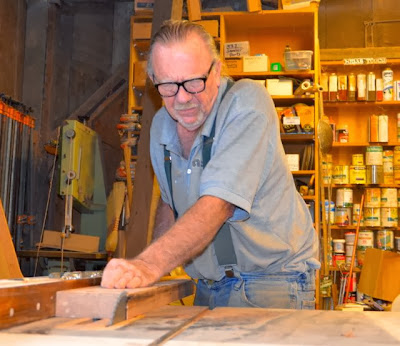 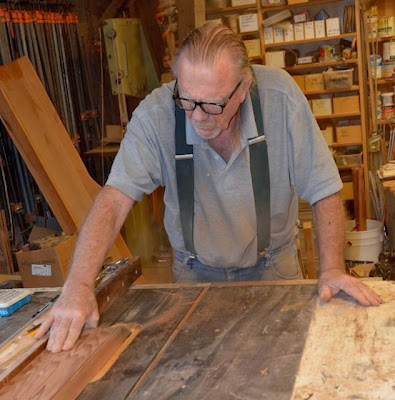 After cutting the long slivers into 8" pieces, I sanded their edges and then commenced engraving "99 Jobs" into the individual bookmarks. James, meanwhile, began cutting slivers from other pieces of lumber. I was hunched over the trim router, engraving "99 Jobs" freehand over and over, when James suddenly cursed and put his thumb into his mouth. Guiding a piece of wood, he'd run the pad of his thumb over the saw blade. The blade was set to protrude about 1/4" above the top of the piece he was cutting, so he sliced a 1/4" gash into his thumb.

Immediately I helped wrap it in gauze and tape. His wife drove him to the Palo Alto Clinic, where he is right now as I write this (the accident happened about an hour ago).

James is one of the best woodworkers I know. He says this is the worst accident he's ever had in his shop. He's careful, and he has a lifetime of experience. Yet it happened.

There are spatters of blood on the table saw. Red stains in the partially sawed wood. No, I won't be including that lumber among the bookmarks—to which we will return in a few days, I hope.

Be careful out there.
Posted by Joe Cottonwood at 4:22 PM No comments:

The editing is nearly complete. We're down to the teeny-weeny style issues such as discussing whether "a blond woman" or "a blonde woman" is better usage (both are allowed). (And if you're wondering, we're going with "blonde.")

I'm aiming for an official publication date of November 15 but hope to be sending out Kickstarter reward copies earlier than that.

Meanwhile, I obsess over the book cover. Thank you everybody for all the feedback. What became apparent is that nobody liked the white background. Many people liked the black background because, as they say, it makes the tool belt "pop out," and people seem to have a fondness for old tool belts. It reminds them of their boyfriend or their grandfather or of their own hardscrabble days. The great thing about the black background is that it still works as a thumbnail, which is important when you're selling books on the internet. As a full size 6x9" book, though, the solid black is not so good – it needs texture.

The most votes, however, went for the siding as background. I've been struggling with that. The siding tends to diminish the impact of the tool belt. Then today it occurred to me that instead of lightening the siding, I'd try darkening it. Wow! Now I've got siding, plus the tool belt pops out. Here's how it looks at this stage: 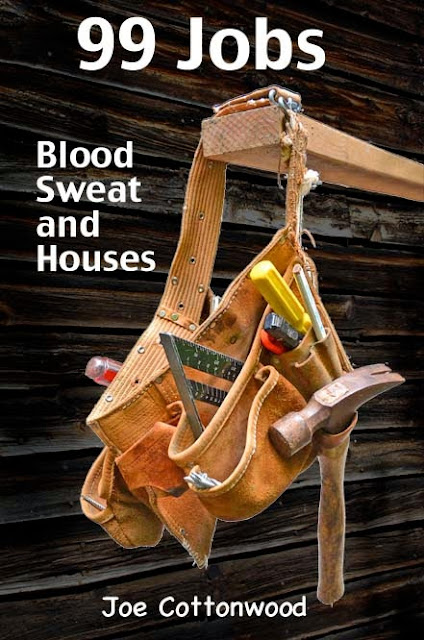 And as a thumbnail:

I'm on the radio again. Mostly it's about one of the biggest and saddest jobs in my life (which will be in the book), taking care of my older brother as his health and his house are collapsing around him – and as I am investigated for elder abuse. For the rest of this week, you can hear it here:
http://www.neighborhoodradio.info/shows/porch-talk

Posted by Joe Cottonwood at 6:47 PM No comments: