Thank you, New Yorker Book Bench, for posting about La Honda's Lit Nite. Our next Lit Nite will be Wednesday, May 26 at Sullivan's Pub in La Honda, starting about 7 pm.  You never know who will show up, but here's a sampling of the readers from last month: 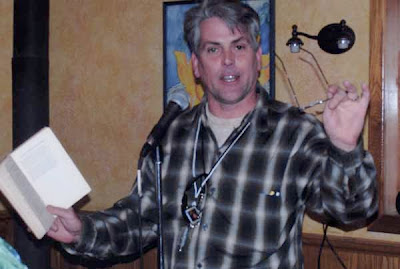 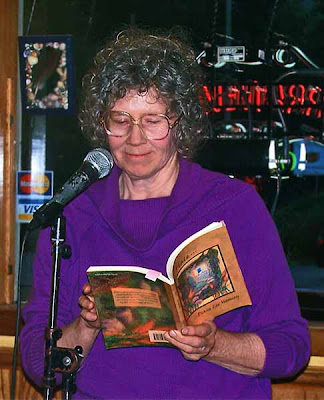 Diane Lee Moomey read a passage from her newly-published, not-yet-officially released ...Place...The Heart of the Dragon.  Diane is a multi-talented artist who designs gardens for a living. 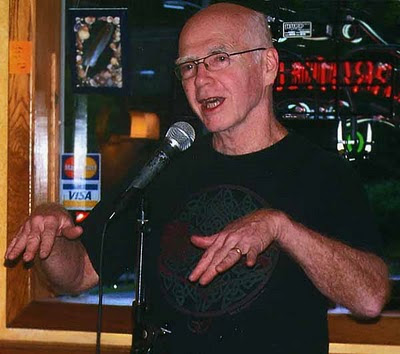 Terry Adams is co-host of Lit Nite.  Tonight he read his poem "Last Draft" which is one of my favorite poems in the English language.  You can find it in his book Adam's Ribs.  Terry, like myself, works in the building trades. 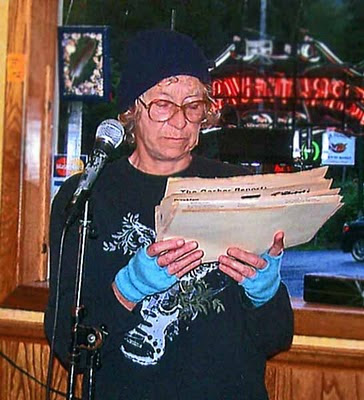 Jean Williams is a La Honda local, quite the character.  She introduced herself to me as "I'm your local bag lady."  Then she said, "There's too many intelligent people in this town."  This original poem was her first reading, and it was a good one.  Intelligent, actually.  We're pleased to welcome bag ladies to Lit Nite. 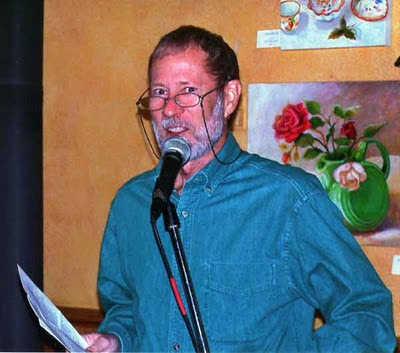 Beto has written about his travels in Costa Rica.  Tonight he read about "Coffee." 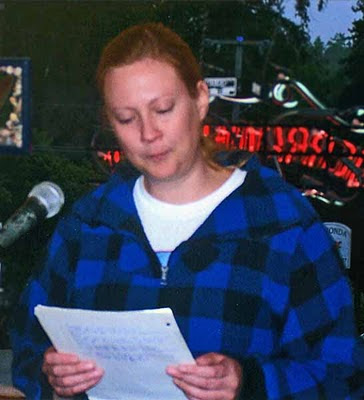 As host, I've learned to put Carol Nelson at the mic as soon as she walks in the door.  Otherwise, she might be gone again.  Tonight, luckily, I caught her in time so she could share her heart-felt poetry. 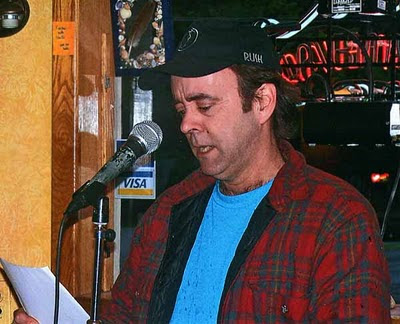 Dan is somebody I've seen around town for a long time and never come to know.  This poem was his first reading with us.  I hope to learn more about him. 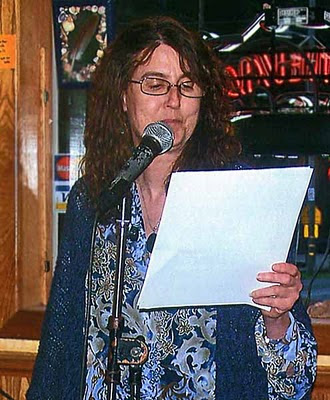 Susan Henkin-Haas lives in an old stagecoach stop/hotel in San Gregorio.  Sometimes she raises goats - and writes about it.  Tonight she read from a ghost story. 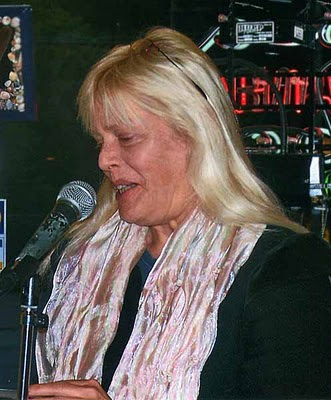 Ann Emerson stepped up to the mic and gave her first public reading.  She introduced herself by saying she'd recently been diagnosed with cancer, upon which she quit her job, left her home, and moved to La Honda. She said "Being diagnosed with cancer was the best thing that ever happened to me."  She then proceeded to read a poem that knocked me out.  What an opening. Kelly is an energetic reader who was making her second visit to Lit Nite. 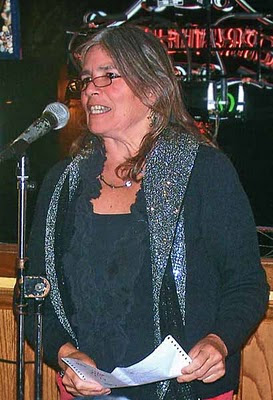 Sparkle Debbie's art work graces the walls of Sullivan's, as her poetry graced our night. 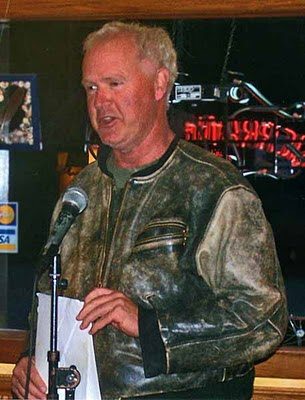 David Strohm produces the children's audio magazine Boomerang.  He is often the highlight of our nights.  This time, he read a touching story about Grandma's Proverbs, which always contained wisdom in unexpected dimensions. 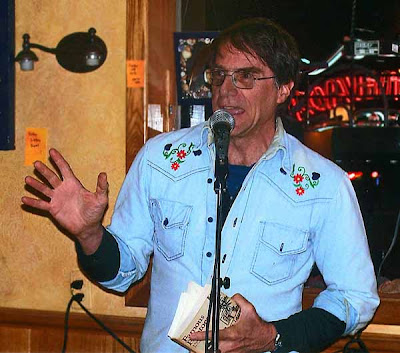 Then there's me, Joe Cottonwood, co-host.  On this night I read a ghost story from my novel Famous Potatoes. 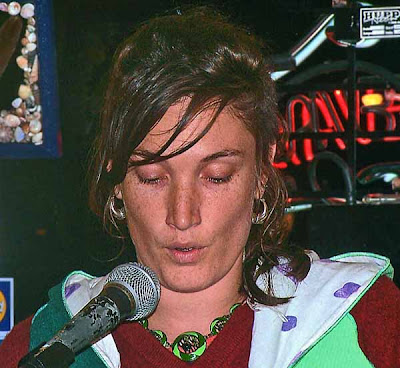 Vanessa, wearing an elf costume which she did not explain (costumes are not uncommon at Lit Nite), gave a passionate reading of one of her works. 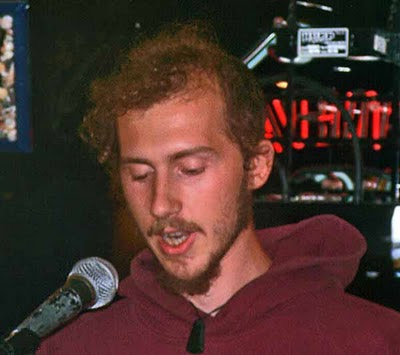 Paris, who is usually seen in the company of Vanessa, read reflections on his travels in Spain. 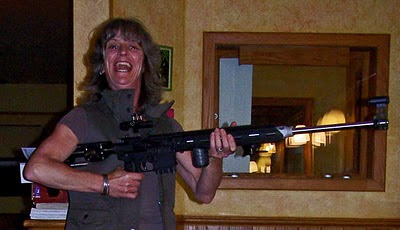 Jane Sullivan (shown here explaining the Lit Nite weapons policy) (are we the only literary gathering that has a weapons policy?) read a chapter from the memoirs of Patrick Colgan, a La Honda character and beloved citizen of the world who, sad to say, passed away a week later.
Posted by Joe Cottonwood at 11:00 PM 1 comment:

This morning at 5 a.m. after too little sleep I awoke with a jolt and the thought: "Symbionese Liberation Army!  Holy fuck!!!"

Probably not too many other people can say that.  Anyway, what it means is that in my subconscious dream world the neurons finally clicked, and I realized that my novel and podcast of Famous Potatoes make a reference to the Symbionese Liberation Army, which didn't exist until 1973 and didn't become nationally infamous until 1974 when they kidnapped Patty Hearst.

In my podcast description, and in the ebook edition, I state that the events of the novel take place in 1971.  Actually, the story covers more than one year, and one of those years obviously has to be 1973 or later.  I'll correct this in the podcast description and in the ebook blurb as soon as I can - which might take a few days for the changes to percolate through all the various servers out in the internet world.

Most of Famous Potatoes is based on, or at least inspired by, actual events in my life which took place in the years 1967-1971.  Billie, the character who mentions the SLA, is somebody (name changed) I met in 1970.  Obviously the real "Billie" couldn't have mentioned the SLA because it didn't exist back then, but the fictional Billie could because, hey, this is fiction.  I wrote the novel in the years 1974-1976.  Hence my confusion when, 35 years later, I wrote the podcast description and ebook blurb. 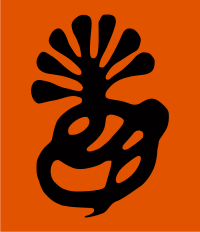 And by the way, isn't it time for a revival of the SLA?  They were hilarious - and murderous.  Naive - and despicable.  Nuts with guns, not too different from what we have today in certain groups making the news.
Posted by Joe Cottonwood at 10:40 AM 2 comments: