Most of the jobs begin like a blind date.  You meet people.  You size them up; they size you up.  What's different is that you try not to get screwed.  They have problems; you try to help.  You work hard.  Stuff happens.  You live by your wits.  Sometimes, you do things that make you proud.  Sometimes, you make a friend.

Since 1976 I've worked small jobs in the construction trades: carpenter, plumber, electrician.  Some jobs last an hour.  Some take months.  That's a lot of blind dates.  And all the time, I was keeping a journal.  For the next year I'm going to remember some of the people, the problems, the craft, the joy and sorrow, day by day.

(This is the first post of a new blog I've started which will run in parallel with this Clear Heart blog.  I call it 365 Jobs.  Each day I'll pluck a job from my journals and try to figure out what happened, what was the larger meaning of the work I did that day.

It's an experiment.  I don't know exactly where it is going.  Please join me.  Come along for the ride.  At first, I'll cross-post each entry in this Clear Heart blog and also in the 365 Jobs blog.  I may also start issuing each new day as a podcast.  We'll see.  Like a lot of construction work, I'll just be learning how to do it as I do it.)

Have a happy new year, folks!
Posted by Joe Cottonwood at 8:57 PM No comments:

This article was written for the La Honda Voice newspaper.  Here are two people who have spent a lifetime working with their hands.

Maybe it all started with the sinking of a houseboat.  Devora Alpert, a young actress who performed with the American Conservatory Theater in San Francisco as well as occasional small parts in indie films, was living on an unwieldy, topheavy houseboat in Pete’s Harbor near Redwood City.  One day while she was away, the boat sank.  Losing all her possessions, she found a temporary summer home in La Honda.  It was 1970.  Music rang through the redwoods from huge speakers mounted in a section of Redwood Drive known as Hippie Loop.  A precursor of the Doobie Brothers, then known as Pud (or unprintable variations of that name), were regular players.  Devora walked among the music and the trees in long flowing dresses and met a handsome young man, a biker/surfer visiting from southern California, by the name of Tom Bratton.  Almost immediately he asked if she wanted to go just for a weekend to Rancho La Puerta in Mexico, where he had worked as an exercise instructor on a "fat farm" for Hollywood stars.  She agreed.  It was that kind of an era, and La Honda was that kind of a place. 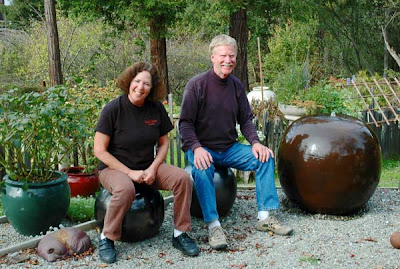 Two years later, Devora and Tom set up a house and pottery-making operation on Cuesta Real, and La Honda Pottery was born.  Tom works the clay, Devora does the glazing.  Both have had mentors but are largely self-taught. 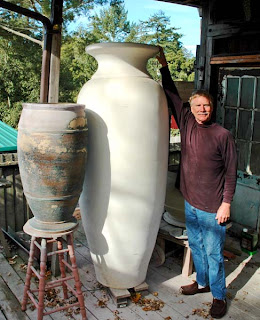 Tom had crafted pottery since childhood; Devora had been a painter but knew nothing of glazes.  Devora says, “If I’d known I’d be doing this, I’d have taken more Chemistry.”  Through trial and error, often working on hunches, Devora invents glazes to match custom color requests while Tom, using a process he invented, constructs giant one-of-a-kind urns that are sought by decorators and designers all over the world from Peru to Saudi Arabia to Japan.

Tom was a member of the La Honda Fire Brigade and, working at home, was often the only person who could respond at mid-day.  In the summer if he’d been busy at his kiln when the call came in, you might have seen a nearly naked fireman driving the one little red La Honda fire truck down Highway 84.

Craft fairs were hard work, requiring lengthy packing and unpacking.  Finally in 1978 the fireman built a fire in his own back yard, invited friends over, burned the craft fair booth and cooked food over it.

To make it as a potter, you have to stand out in some way.  Devora’s custom glazes and Tom’s giant urns make them special, but it wasn’t always so.  At first they made the usual cups and saucers and vases, and then they hit on the idea of “Pottery for the Birds.” 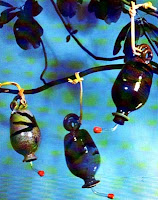 They produced thousands of hummingbird feeders, bird houses, and feeding stations that were sold in Audubon Stores and other outlets all over the country.  Their success lasted 3 or 4 years before cheap imitations started crowding them out.  As Devora says, you have to be “on the pulse,” always staying slightly ahead of the crowd. 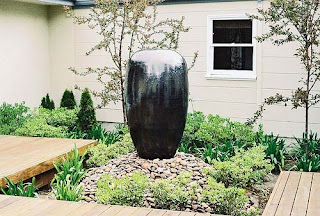 They had another success crafting fountains.  Tom currently is tempted to try his hand at making ceramic fence-post caps, something that might have a run similar to hummingbird feeders.

Meanwhile, there are always the giant urns.  Tom has developed his own mix of clay and uses his own process to create them.  It’s hard work, but he takes satisfaction in being an artisan creating something unique, hand-crafted, in his own style.

Maintaining a production schedule, and depending on pottery for his livelihood, makes Tom what he calls a “blue collar potter” — as opposed to an academic or hobby potter who doesn’t have to meet the real-world discipline of selling one’s work to actual people.  Tom takes pride in craftsmanship:  “You have to make it your own way, make it special to be more desirable than something cheap no matter whether you’re making pottery or beer.  It’s about being an artisan.”

They still make cups, vases, and platters which are much appreciated by the locals of La Honda.  Many a dinner is served on Tom's fine shapes colored by Devora's sparkling glazes.

Now for the first time, Tom and Devora have an additional, if perhaps temporary, source of income: a grant from the William T. Colville Foundation to hold workshops and pass some of their one-of-a-kind skills to a new generation of potters.

Tom is interested in going green, installing solar panels to power his kilns.  Partly he’d like to lower his electric bill, which can run $500-1000 when he’s operating full blast.  But also, if he could be certified as a “green” producer, he’d have a leg up in selling to new buildings which will only accept green-certified products.  It would take a big investment, and the last two years have been lousy for the pottery trade, as for everybody else.  Tom measures his monthly production by how much clay he uses.  He buys clay by the ton, and in normal times can go through three tons a month, six in great times.  Lately, it’s been one ton a month.  Now, though, Tom senses that the rich people, at least, are loosening their purse strings again. 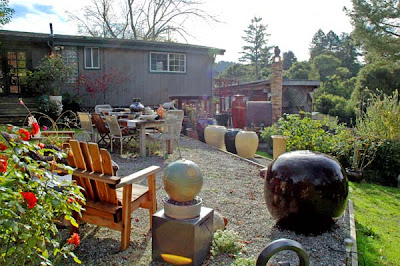 Tom and Devora have lived in “The Compound,” as they call it, since 1972.  They have two Morgan horses, Max and Breezy, in a stable on the premises.  Devora tends their extensive gardens.  Pottery is strewn everywhere.  There are a dozen kilns of various shapes and sizes.  Occasionally black smoke belches briefly from one or another chimney, and once a neighbor called the fire department in a panic.  Mostly, though, it’s a quiet, productive oasis where beautiful works are created by hand.  It’s a mix of life, toil, and play all in one spot, and Devora never wants to leave:  “I’ve been here so long, I have moss on my north side.”
Posted by Joe Cottonwood at 2:33 PM 1 comment: