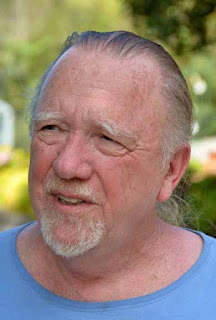 James Adams, cabinetmaker, has been accumulating trees for a while.  Not entire trees, exactly, but the rough-sawn lumber milled by woodcutters around La Honda.  From Con Law, there was a walnut tree.  From Orril Fluharty, a pine.  From Neil Young’s Broken Arrow Ranch, a cypress.  Here and there, a bay laurel, a black acacia.  Trees that were sick or in the way or felled by a landslide.  Some of the wood, such as the black acacia, was of questionable value.  The lumber was salvage, and local, and would need to dry out for a few years.  “It was pure speculation,” James said.  “I had no idea.”

One day James, needing a new guide for his table saw, grabbed a rough scrap of  black acacia.  First he sanded it.  What he saw made him sand more, then apply a coat of finish.  “It just popped,” he said.  “It looked like koa, only better.”  (Koa is a highly valued hardwood from Hawaii and is a member of the acacia genus.)

What began as speculation became fine furniture, such as a cabinet James made for Russ Haines, a La Honda resident.  In this detail, the top is claro walnut while the support is black acacia: 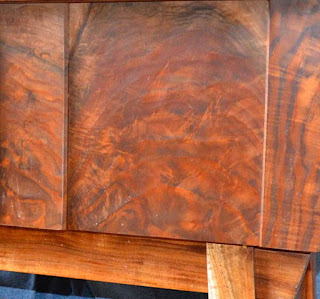 In a recent project, James built the kitchen cabinets for Maggie Foard, the well-known goat farmer and cookbook author.  Maggie already knew she wanted to use salvage.  Architect Lori Hsu drew the layout.  James chose details of how to integrate. 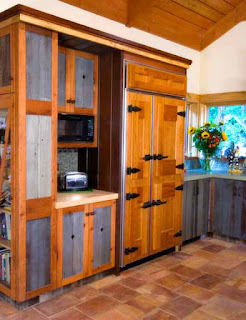 Some of the wood, such as the panels of these cabinets, came from an ancient fence on the Driscoll Ranch: 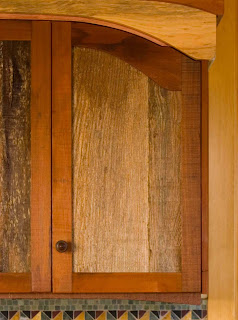 Befitting their origin at a working cattle ranch, the fence boards included a few bullet holes (apparently not employed in the cabinet panels).

Under the big kitchen sink, James placed posts on which he carved bun feet and fleur-de-lis: 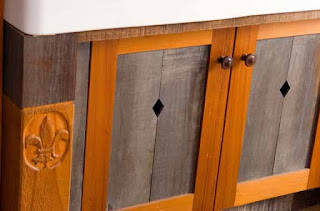 Working on a smaller scale, James makes sets of coasters from hard and softwoods obtained locally.  From left to right, on top are walnut and bay laurel (with a few insect holes to assure authenticity); on the bottom are black acacia and pine: 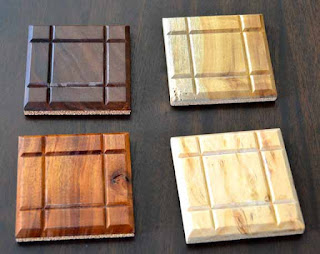 For another project, James is gathering driftwood at San Gregorio Beach.  Speaking of his finds, he can joke or wax poetic:  “Many pieces have spalting, a network of black lace-like patterns randomly suffusing the grain, acquired as the fallen wood lay on the forest floor before having been washed to the sea.  There’s one piece of redwood with stunning reds and blacks like shaded fire and smoke, and harder than Chinese algebra.  I never knew redwood could be that hard.”

Like many craftsmen, James’ language belies the popular image of the uneducated woodworker.  His father taught English at Palo Alto High and College of San Mateo.  From a childhood in Menlo Park, James came to the Haight Ashbury.  He says, “I bummed around, did my hippy thing.”  One day, he pursued a job listing for a cabinetmaker’s helper, which turned out not as expected:  The cabinetmaker wanted somebody to paint his house.  Needing the money, James took the housepainting job and eventually eased his way into various cabinet shops.  From “bang bang” shops turning out a cabinet every fifteen minutes to classical mortise and tenon work, from the Hard Rock Cafe to roulette wheels for the East Palo Alto mafia, from the Atomic Energy Commission to NASA (he built a cabinet to display a moon rock), “I had kind of a history working for somebody six to twelve months, catching up on the technology, then moving on.”

Along the way, James moved to the relative peace and quiet of La Honda, where he has lived for three and a half decades.  For many of those years, he was the town’s long-running multi-league soccer coach.  With age, he says, “I’ve hung up my cleats.”

James is an astronomy freak who owns a collection of telescopes, including a home-assembled refractor.  On occasional nights he has set up the eight foot long telescope in the school parking lot and shared it with anybody in town who wanted to drop by.  A lifetime enjoyment of science fiction has encouraged his viewing of planets and deep space nebulae.  He is also something of a raconteur, telling tales of riding a Vincent Black Lightning motorcycle or participating in psychedelic "research." 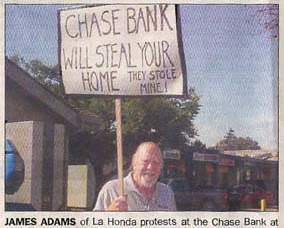 James lost his house in the recent financial meltdown.  Feeling snookered by his mortgage company, James became a picketer outside Chase Bank, much to the institution’s displeasure.  Partly disabled by arthritis, he is engaged in salvage of the most local sort: his own life.  Currently he lives in a trailer and engages in part-time cabinetry.

In spite of financial hardship, James says, “I love the fun of woodworking.  Things fun don’t pay as well.”

These days, he seeks creative challenges.  Inspired by legendary craftsman George Nakashima (and Nakashima's book The Soul of a Tree), James seeks a natural style that gives an idea of what the original tree was like.

Right now, among James’ projects are a commission to build a trestle table without hardware but with a leaf.  He’s also  designing a steampunk guitar.

Creative challenges, local salvage.  As James wrote:  “Discoveries.  In found pieces of trees, beauty in flotsam littering a beach, in the jetsam of discarded pieces of wood.  If only there was some way to apply this principle to our day-to-day experiences…”  Which of course, there is.

(The photos of the Foard kitchen are used by permission of Lori Hsu, architect, who retains all rights.)
Posted by Joe Cottonwood at 4:45 PM 2 comments: