Danny Ain't is now an ebook

After many roadblocks and frustrations, at last my novel Danny Ain't is available as an ebook.  With this addition, all three titles of The San Puerco Trilogy can be purchased as an Amazon Kindle edition, an Apple ibook, a Barnes & Noble Nook edition, or from any other seller of ebooks including my favorite, Smashwords.

I had a pleasant surprise when I returned to the Danny manuscript to prepare it for the ebook format:  I was amazed to see how current the topic is.  Though written 20 years ago, Danny Ain't foreshadows the whole 1% versus 99% that is part of the Occupy Wall Street discussion.  The character Danny has a very clear eye in observing the differences between rich and poor.  Danny, of course, is dirt poor. 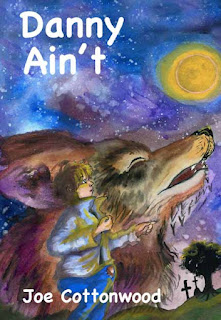 The lovely painting on the bookcover is by Melody Pilotte.  Melody loves coyotes, and — special bonus — she has Cherokee blood.  When she learned that the character Danny is also part Cherokee, Melody tackled the project with passion.

A better title might be DANNY COYOTE because that's what the book is about:  Danny, and a couple of coyotes who befriend him.  Danny's father blows a hole in the television with a rifle and then goes into a hospital for a while, leaving Danny to live alone in a trailer with no money and little food.  That's when the coyotes start coming to visit.  Coyotes are tricksters.  Coyotes are clever survivors.  So is Danny as he learns what kind of human being he truly is — and what kind he ain't.

DANNY AIN'T is part of the San Puerco Trilogy, three award-winning novels that have been loved by adults and children alike, about the adventures of three boys in the scrappy little town of San Puerco, California.  Other titles in the trilogy are THE ADVENTURES OF BOONE BARNABY and BABCOCK.

"The author of THE ADVENTURES OF BOONE BARNABY returns to the small town of San Puerco for another engaging, well-told tale." — Kirkus Reviews

"Brave, compassionate Danny, who embraces his incorrect grammar as symbolic of his identity, is worth cheering for." —Publishers Weekly

DANNY AIN'T won the BABRA Award (Bay Area Book Reviewers Association) as Best Book for Children in 1992.
Posted by Joe Cottonwood at 11:26 AM No comments: 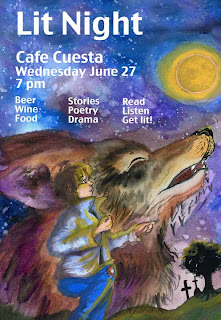 On the last Wednesday of every month, we hold Lit Night in the bar of Cafe Cuesta (formerly Sullivan's Pub) in La Honda.  This coming Wednesday, June 27, I'll be celebrating the imminent publication in ebook form of my novel Danny Ain't.

Lit Night provides a casual, friendly, somewhat-lubricated audience for writers to try their voice in front of a live microphone.  There is always a mix: amateur and pro, beginner and experienced, story-tellers and poets. Some of it is awful; much of it is very very good.  We've had readers as young as middle school and as doddering as myself.  We have a veterinarian who tells animal stories (and plays the harmonica).  We have highbrow literature mixed with cowboy poets.  It's fun.

Among the writers who have joined us are:
Terry Adams
Anne Emerson
David E. LeCount

Willard Wyman
David Strohm (publisher of Boomerang)
Diane Lee Moomey
and several more whose names who will come to me after I post this.

I've been informed that Lit Night conflicts with ukelele night in Mullumbimby Australia.  Possibly there are other conflicts in other parts of the world.  But to those of you without conflict, I extend a hearty invitation.  Come on down to Cafe Cuesta in La Honda, have a beer and get Lit!

Note: The poster for Lit Night this month uses the cover image from Danny Ain't.  I'll blog more about Danny Ain't in a few days, after Amazon Kindle and Apple ibook and Barnes & Noble Nook and all those big-biz sites get their links straightened out.

For several years now I've been buying outdoor deck furniture from a strong young woman who sells from the back of her pickup truck, usually accompanied by her mother riding shotgun in the cab.

She makes chairs and side tables using the kind of redwood that would be rejected by most self-respecting furniture makers: full of sapwood, wanes, knots and voids.  The design is somewhat chunky and the workmanship is less than thorough.  I'll be lucky if they last ten years through our soggy winters.
And yet I like them.  They have a simple honesty.  They use lumber that would otherwise go to waste.  They're inexpensive.  They're local.  I like buying directly from the craftsperson.  The young woman has a simple honesty, just like the chairs.  Most important, she has a vulnerability that brings out my protective instinct.


So I asked her if she built picnic tables, and she said yes.  I ordered a round one, five feet in diameter, plus four rounded benches.  I needed them in one week.

A week later, she delivered.

The table was massive.  Immediately I saw that it was too tall, which seemed to surprise her.  "How high should they be?" she asked.  We measured two old picnic tables on my deck, which are 30" high.  Hers was 32".

She agreed to cut the legs down, so I got my power saw.  "Is that a hand saw?" she asked.

Clearly she had no idea how to use the worm gear Makita, and also she seemed puzzled as to how to mark the angled legs to remove two inches.  So I measured and cut the legs myself while she watched, learning.

After she left, I whacked a few nails that she'd left sticking out.  The table still looked kind of crappy, and upon study I realized that it was the massive edge that made it look like the work of an amateur.  Running my half inch rounding router bit along the edge created a much more pleasing effect.  Later, I stained it with Superdeck Red Cedar so it will shed water, at least for a while.

I bet it's the first large round table she ever made.  I bet she had to rush to meet my deadline.

She charged me about one fifth what it would have cost in a store.

I love it.
I spent my career hiring beginners, often teenagers, and training them.  This woman is no teen and not exactly a beginner, but I feel like I've just done it again.  Her next table will be better — and probably built in less of a rush.

Was I too soft on her?  Not by my values.  I remember when I was starting out, taking jobs I'd never tried.  How else can you grow?  Sometimes I failed.  My customers were usually kind to me even in failure.  The ones who were unkind hurt me badly.  A few more of them, and I would have quit.  Fortunately if you're straight with people, usually they're forgiving, as long as you do your best to make up for the mistakes.  In this case, the price made up for the problems.  I enjoyed my part in the process, helping to fix it up.

Deck furniture can come with good karma.  I'll be buying more from this woman.
Posted by Joe Cottonwood at 3:59 PM No comments:

An Evening in May

I'm a dinner guest among about a dozen people at a home in Palo Alto.  A house down the street is owned by, let's just say, a world-famous billionaire.  It's that kind of neighborhood.

My hosts have lived in this home for less than a year.  It's a comfy old place with high-end conveniences tucked into a relaxed decor.  Knowing my interest in houses, the husband gives me a tour before we sit down to dinner.

I scarcely know these people, though I like them instantly.  I'm a guest because of relationships, though we're not related — it's complicated — and the hosts are gracious enough to include me as part of the package.  Among this small group are a Federal judge, two attorneys, and a Superior Court judge.

During dessert served with an exquisite French tea, the hostess notices that I'm staring at the ceiling of the dining room.  She follows my eyes.  There's a circular wave in the surface, about twelve inches in diameter, like a ripple on a pond.  It's subtle.  There's no discoloration, no crack.

I should have looked elsewhere.  I can't help it, though.  I notice these things.  And I know how to read drywall.

Standing on a (lovely) chair, touching it with a finger, I say, "It's wet.  Isn't there a bathroom directly above?"

A minute later, the hostess is watching as I crawl into a space behind the shower and bath.  Parting some insulation, I place my hand between joists — and my fingers feel a puddle.  "Uh-oh," I say.

It's a huge bathroom with two sinks, a steambath/shower, and a separate Jacuzzi, all encased in elaborate marble slabs.  "Best case," I say, "it just needs recaulking."  I point to some areas of peeling sealant.  "Worst case, you need to repair or replace the Jacuzzi, which would require pulling out all this marble."

This is exactly the kind of job that used to be my specialty: too small to interest the big contractors but too complicated for a handyman.  With my bad back, I just can't do it anymore.  Unfortunately, the only tradesmen I'm familiar with are people who lack the plumbing skills or else lack the, uh, social delicacy to work for such high-end clients.

"Well, thanks for looking," she says.

Back at the dining table, all eyes keep checking the ring on the ceiling.  "I wonder if it will collapse on me," says the Federal judge sitting directly underneath.

I whisper to my wife: "I don't think they'll ever invite me again."

Posted by Joe Cottonwood at 10:33 AM No comments:

Labels: 365 Jobs, Joe the Other Plumber 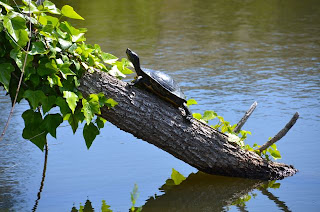 Turtles climb trees.
Carpenters write poems.
My son soon will be a father.
Posted by Joe Cottonwood at 10:34 AM No comments: