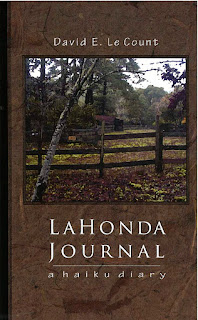 The old gloves
hold the same wrinkles worked
into my hand


Just 20 miles from the Silicon Valley, the little village of La Honda has long served as a counterpoint to the frantic high tech lifestyle.  From the regulars who hang out on the porch at Apple Jack's (motto: We eat puppies) to the readers and writers who hang out at La Honda's monthly Lit Night (motto: Drink hearty and read something) to the musicians who seem to be playing everywhere at all times (motto: The best music you never heard), the town has long been an alternative outpost.

Picture window —
a hummingbird stares at me
in my cage


David E. LeCount, whose haiku has appeared on tea bottles all over the world, now has a lovely new book called La Honda Journal: a haiku diary.  It's a gentle, funny, and very wise reflection of family, love, children, and the rural life.


David has frequently joined Lit Night at Cafe Cuesta (formerly Sullivan's) to down a beer and read a poem or two.

To write, the old waitress
takes the pencil behind her ear
and tongues the point


I want to quote them all, but I'll stop now.  You can purchase the book at amazon with this link. You'll get 153 haiku for just $12.  That's less than 8 cents per haiku.  What a deal!  Read them and you'll go to a place where fat frogs sink the lily pads, where a woman's hair blows across her lips as she's saying good-bye, where piglets climb tumbling over your foot as you shovel their wallow.  You'll be glad you came.
Posted by Joe Cottonwood at 7:41 PM