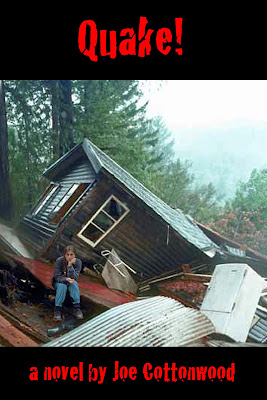 On Tuesday, October 17, 1989 at 5:04 p.m. an earthquake ripped through the San Francisco Bay Area.  It was awful, but it wasn't the civilization-flattening Big One that we know is coming some day.  So we called it the Pretty Big One.

Just in time for the anniversary of that event, I'm pleased to announce that my novel QUAKE! is now available as an e-book.

All the television news coverage was of the burning houses in San Francisco, the collapse of the Cypress Freeway in Oakland, the toppling of a section of the Bay Bridge.  Spectacular stuff.  And there was the postponement of the World Series.

Meanwhile away from the cameras, a remarkable story was unfolding on Loma Prieta Mountain, which was the epicenter of the quake.  Among the collapsed houses and broken roads, people started helping people.  Small heroes.  Thousands of them.

Five years after the Loma Prieta Earthquake (also known as the World Series Earthquake), I wrote a novel about it, seeing the quake through the eyes of a teenage girl living on Loma Prieta Mountain.  The events in the novel are true.  Only the characters are fiction.

After many years out of print, I have - at last - regained the rights to my own book.  I'm making it available immediately as an e-book.

You can get it from Amazon: Quake! Kindle edition

You can get it from Smashwords in any format.

You can get it from Apple's iBookstore for iPad or iPhone reading.

And for a limited time, the price is just 99 cents.  That's an earthshaking bargain!
Posted by Joe Cottonwood at 5:59 PM