George Nakashima: The Soul of a Tree 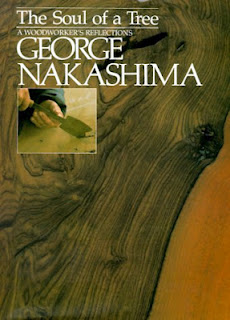 In preparing my profile of James Adams, James mentioned that he was trying to follow in the path of George Nakashima.  Naturally, I had to get my hands on a copy of Nakashima's The Soul of a Tree.  I've just read it, and it's changed my life.

What an inspiring man — both for the life he lived and the works he created.  I've written before that the Shakers were a source for my woodwork and for my method of writing.  Now I add George Nakashima as a spiritual guide, a man who once joked: "I am a Japanese Shaker."

He is best known for his tables made of large wood slabs joined by butterfly joints.  The tops are smooth while one or more edges are the natural rough edge of the tree.

I'm fascinated by his two-legged, leverage-defying conoid chairs, which must have fantastically tight joints: 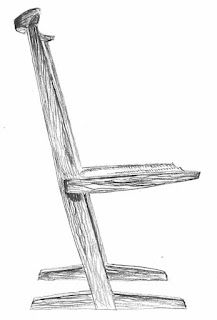 As with poetry, a reviewer can best let the book speak for itself, in word and image.  Here is George Nakashima:

On resurrection: "This slab was cut from one of the great trees of England...  A deep furrow remains, giving its surface a sculptured look.  The usual market for fine timber would not find much use for such a slab, practically a reject of nature.  I have sometimes rescued these great slabs from the dump heap and sometimes, with luck, seem to give them a second chance at life as good furniture.  The natural forms with all their bumps and 'warts' survive.  To fashion such a piece of wood into fine furniture is almost an act of resurrection." 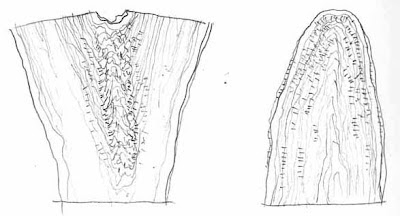 On cutting: "Usually, cutting across the crotch produces the finest figuring [on left].  This cut also provides the greatest usable width.  Cutting along the crotch [on right] results in a somewhat triangular piece of lumber with less surface area to work with.  The figuring is less intense, too.  At the point where a tree branches freely, three or more crotches may be found.  The result in the lumber can be truly extravagant figuring." 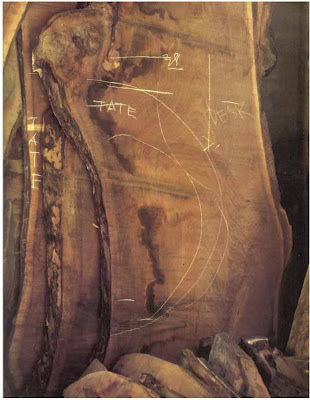 "I make any number of preliminary drawings in chalk to get a feeling for the proportion of the object we are creating.  It's easier to make a final decision where to cut if there is something to see on the board."

"There is drama in the opening of a log — to uncover for the first time the beauty in the bole, or trunk, of a tree hidden for centuries, waiting to be given this second life." 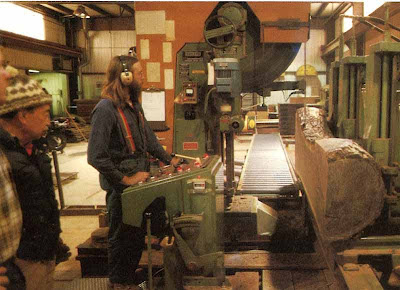 "The key man in the process of cutting logs is the sawyer, one of the great craftsmen of our age with steady nerves and experienced judgment.  It is necessary to have an almost silent dialogue with this sawyer.  Few words are spoken, but thickness, the direction of the cut, the positioning of the log — all must be decided with precision."

On the soul of a tree: "When trees mature, it is fair and moral that they are cut for man's use, as they would soon decay and return to the earth.  Trees have a yearning to live again, perhaps to provide the beauty, strength and utility to serve man, even to become an object of great artistic worth."

"Each flitch, each board, each plank can have only one ideal use.  The woodworker, applying a thousand skills, must find that ideal use and then shape the wood to realize its true potential."

"The object is to make as fine a piece of furniture as is humanly possible.  The purpose is usefulness, but with a lyric quality — this is the basis of all my designs."

On hand versus power tools: "Our approach is to realize a synthesis between the hand and the machine working as a small unit."

"As much as man controls the end product, there is no disadvantage in the use of modern machinery and there is no need for embarrassment...  A power plane can do in a few minutes what might require a day or more by hand.  In a creative craft, it becomes a question of responsibility, whether it is a man or the machine that controls the work's progress."

On nature: "Once I was pulling a fairly large branch and it suddenly gave way, knocking me breathless to the ground.  As it fell, two long shards of wood broke off, each fifteen to twenty inches long and as sharp as a spear.  I was wearing heavy rubber boots with leather tops.  One of the shards pierced one boot's heel, while the other slashed through it.  Lying on the ground, I waited for the pain to start, for it seemed as if I'd been crucified.  But as my senses returned, I realized the wood had gone through the boot, but not my foot: all I had were scrapes on my sole and heel.  Nature is compassionate."

Part of my feeling of kinship with the man comes from the remarkable facial resemblance between him and my own father, who was neither Japanese nor a woodcrafter.

On personal history:  "Then Pearl Harbor broke, and all of us of Japanese descent were put in concentration camps.  My wife and I and our newly born daughter were sent to a camp in Idaho.  This I felt at the time was a stupid, insensitive act, one by which my country could only hurt itself.  It was a policy of unthinking racism.  Even Eskimos with only a small percentage of Japanese blood were sent to the Western desert to die."


After relocating to New Hope, Pennsylvania: "After a year of doing general farm work, it was quite clear to me that chickens and I were not compatible."

On building his house in New Hope:  "At no time did we have more than fifty dollars in cash, but by scrounging materials, gathering stones off the property, digging foundation by hand, and working evenings and weekends, I was able to build a rough structure by Thanksgiving. …  Our first winter in the house was bitterly cold, and the faucet froze in the kitchen."

"We built, quite literally, on the principle of laying stone upon stone.  We had considerable stone on our land, and it was simply a question of hauling it by wheelbarrow to the building site."

On architecture:  "There is a wonderful feeling to be had in erecting a stone wall.  There is a sense of order and permanence.  A good wall will last for generations and even millenia."

"The decline in quality of modern furniture is probably due in part to the use of the quick, easy and cheap dowel joint.  The decline of modern domestic architecture can be traced to the popularity of the stud wall put together with hammer and nails, a type of construction calling for no joinery at all.  By contrast, the early American house and barn with their excellent joinery still represent the best we have produced and will greatly outlast contemporary buildings."

Nakashima built several innovative structures at New Hope, blending traditional Japanese and American styles with modern materials.  This photo shows the interior of the Minguren Museum, which has a roof that is a hyperbolic parabaloid.  "The span of the room is thirty-six-by-thirty-six feet, but note that there are no trusses or beams."
"The stairway is made of three-inch thick oak planks cantilevered twelve inches into a fieldstone wall."  I wonder: With one end anchored in stone and the other hanging in free air, how much do they bounce?
On local salvage:  "I call our reception house a sanso, or 'mountain villa,' in Japanese.  I built it … entirely with materials cast off from my workshop.  Castoff though the building materials were, they were quite unique since the rich and rare woods that I normally use are not generally obtainable.  The floor, for example, is made of red birch and walnut boards with extraordinary figuring.  Most of the outside construction was done with a single dead elm.  This elm, about five feet in diameter, could not be lifted by one huge forklift, but required two.  The elm had been cut into two-and-a-half-inch-thick boards.  Once cut, there seemed to be no client demand since the wood was light in color and not unusually grained.  So, we happily used it in the reception house."

There's so much more:  Drawings by Nakashima's own hand.  Chapters about species of trees, their spiritual and practical uses.  Pages about where to cut, and why.  Architectural commentary.  Gorgeous photos of Nakashima's stunning original designs that are so lovely, you'll want to run your fingertips over the paper.  Slabs of trees that make a woodworker's heart race.  A genius of a man who enriched our lives, even if we never knew him.


The original edition of the book is out of print (I borrowed mine from the library).  Used copies are fetching enormous prices (as are his furniture), but a new edition of the book has been released by Kodansha.  I've just bought the Kodansha version and am pleased to report that it's of excellent quality.  The man deserves no less.


Note:  If you're interested, here's a link to the Kodansha edition at amazon.com:
The Soul of a Tree: A Master Woodworkers Reflections.

Links to some other books I've reviewed:
A Carpenter's Life by Larry Haum
House by Tracy Kidder
Toil: Building Yourself by Jody Procter
Religion in Wood: A book of Shaker Furniture by Edward Deming Andrews and Faith Andrews
With our Hands: The Story of Carpenters in Massachusetts by Mark Erlich
The Mind at Work by Mark Rose
Tools of the Trade: The Art and Craft of Carpentry by Jeff Taylor
A Splintered History of Wood by Spike Carlsen
Reverence for Wood by Eric Sloane
Cabin: Two Brothers, a Dream, and Five Acres in Maine by Lou Ureneck