Peter Korn, Why We Make Things and Why It Matters: The Education of a Craftsman 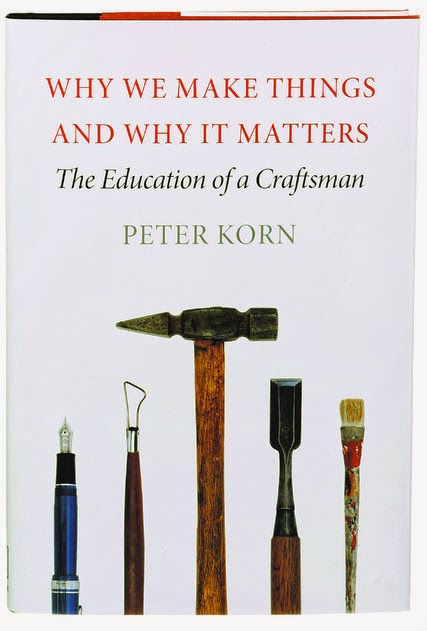 I'm a craftsman in two worlds, as a writer and as a construction worker. I don't write the kind of novels that win highfalutin awards, and I don't build the kind of houses that win architectural honors, but I'm pretty good at what I do. I craft. I make a living. So I'm always interested in how other people integrate their values, their families, their simple need to earn a living into their passion for craft.

Peter Korn is a writer, an educator, a furniture maker. As a craftsman he discovered that he couldn't make a living -- or sustain a marriage -- chiseling mortise and tenon joints one by one, chair by chair. He could teach, though. And he could write. In this book, he's a philosopher as he tries to come to grips with what it means to be a craft worker.

We view books through our own personal filters, so here's mine: what interested me was not the philosophy but the memoir aspect, the people Korn met and his own growth as a person and as a furniture maker. He started like me as a carpenter on a construction crew. He had some advantages I never had -- a private school education, Ivy League college, a father who continually bailed him out of business failures and personal setbacks. I envy that. He had Hodgkin's disease and chemotherapy -- twice. I don't envy that. He developed his own furniture style and then really found his calling as an educator, founding and running the Center for Furniture Craftsmanship in Rockport, Maine. I applaud that.

Korn traces the history of how society has changed its appreciation of craft -- first as work, then as skill, and finally as art. Eventually Korn realizes that by embracing a life of craft he was seeking self-fulfillment, seeking "a good life." He also realizes that craft alone is not salvation. He witnesses one man who is a great craftsman but fails in most other aspects of life.


Every man-made thing, be it a chair, a text, or a school, is thought made substance. It is the expression of someone's ... ideas and beliefs.

This book, along with the furniture he made and the school he created, are the expressions of Peter Korn's beliefs. He found his good life.