Did you enjoy a podcast? How about (blush) a tip for the hardworking podcaster? ----- Or ---- Want to buy an autographed copy of a book? Send an email telling me where to ship it and how to sign it. Then we'll use this PayPal "donate" button to complete the transaction. Email is joecottonwood at gmail dot net. 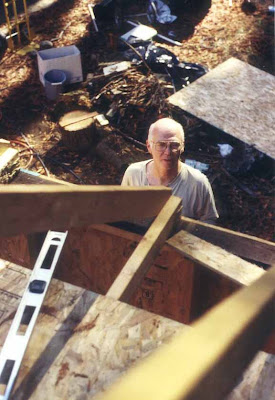 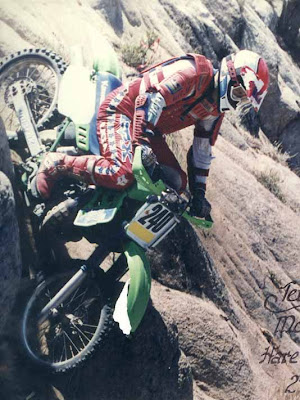 In college, Terry Adams took ROTC and studied Creative Writing, getting an M.A. at Miami University in Ohio.

If you ever wonder what happens to English majors, here’s one story.

After ROTC, Terry was a Captain in the U.S. Air Force during the Vietnam War. He served at the Strategic Air Command Headquarters in Nebraska where they have a bunker that is designed to survive a nuclear hit. His job? He was the Top Secret Control Officer. Terry was the keeper of the targeting instructions for all the nuclear warheads that all the Air Force pilots would need if we launched a nuclear attack. I’m not making this up. 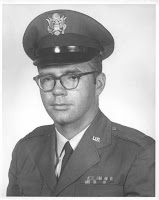 He was there while four students were shot dead at Kent State. He was there when the Top Secret command to bomb Cambodia came across his desk, and he says, “Everything remained right, normal, and calm in Omaha.” He says his corner of the bunker was a quiet place, buried under 300 psi concrete. Few people wanted to visit the bombing codes - and if they did, they'd better have a darn good reason - so Terry was rarely interrupted. He says it was a good place to play cards.

Here’s Terry when he was a Lieutenant:

And here’s the rubber stamp his crew used on Top Secret documents. It says “AGENT FOR CAPT. TERENCE M. ADAMS.”

It’s his only replica of those days except for the memories, which even today, 36 years later, he won’t talk about because what goes on in that place is Classified. Which explains why Terry was a good man to place in charge of Top Secret bombing plans.

Eventually Terry decided to opt out of the destruction of civilization and left the service as a Conscientious Objector in 1972. Back home in Ohio, Terry says, “My father refused to speak to me and changed the beneficiary on his life insurance from me to the United States Department of Defense.”

Terry says, “It was time to move to California.” He found work in Palo Alto as a Vocational Counselor. He met and befriended Vic Lovell, to whom Ken Kesey had dedicated One Flew Over the Cuckoo’s Nest. It was to be a lifelong friendship.

Terry set up a car and motorcycle repair business, then a handyman business, then became a licensed contractor running a couple of crews, then tried fixing up and reselling houses, then became a manager in the Maintenance Department at Stanford University. Right now, he manages the Public Works Department for the town of La Honda, which means he repairs roads and keeps the water running. 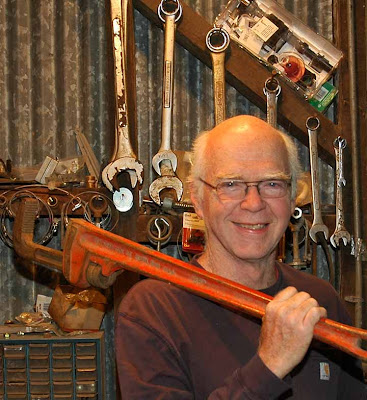 When financial and legal circumstances forced Ken Kesey to sell his old cabin, the one in La Honda where Kesey , Neal Cassady, Merry Pranksters, and the Hell’s Angels all hung out, Vic Lovell advised Kesey that Terry Adams would be the perfect keeper of his legacy. After years of neglect, vandalism, misuse and squatters, the cabin was a wreck. To Terry (though not to the government) the place was an historical site. He intended to restore it as faithfully and respectfully as he could. And then right after Terry bought it, in February 1998, a flood nearly washed it away. The water, Terry says, ran "two feet deep through the house, knocked two walls out of the back room, pushed the front wall 4 inches off the foundation, and left a foot of silt throughout. It took away the bridge, ripped out the water and gas lines – the 250 gallon propane tank has never been found."

The flood left Terry and his wife, Eva, homeless for 18 months. 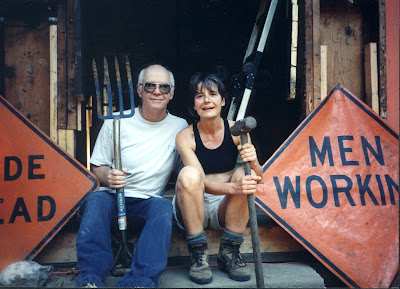 What had been planned as a ten-year rehab was, in desperation, completed in two years. Terry says, "By 2000, we restored it to museum quality with a new, raised foundation and a freeway-rated bridge as the driveway. We numbered and reinstalled each piece of the old pine paneling and reinforced the framing to seismic standards." The entire rehab is a story in itself to be told another day. For a preview, go to the Prankster House web site. (Also for another day - Limey Kay did some masonry on the Kesey cabin during the Merry Prankster era, a story that involves all the basic food groups: drugs, alcohol, guns, Hells Angels... Stay tuned. 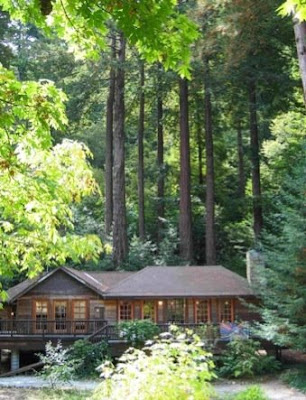 In restoring the cabin, Terry says, “We built cabinets and details with original wood salvaged from parts of the structure that needed to be upgraded. The kitchen cabinets use redwood from the old bedroom ceiling for the drawer fronts. The loft ladder is made from old Douglas Fir floor joists.” Here, instead of dovetails, he made “lovetails.” 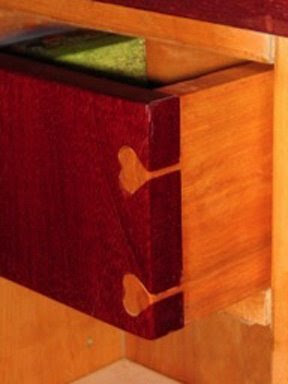 All this time, Terry was a writer. I feel a kinship with Terry because both of us spent much of our lifetime in the building trades and never quit writing. (And as it happens, both of us were Conscientious Objectors.) Our paths first crossed in 1976 at a story circle in Palo Alto hosted by Vic Lovell and Gurney Norman. We reunited years later in La Honda, where we both now live. We are members of the La Honda Poets.

Terry’s no academic in an ivory tower. His hands are callused; beneath his nails are mud and grease. His poems, meanwhile, are as polished as his cabinets and have been published in magazines all over the place. 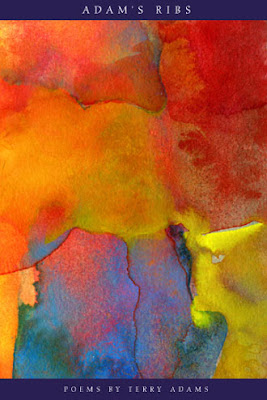 Now Terry has a book of poetry called Adam's Ribs, and it's a dandy. He’s accessible; he’s humane; he has that twinkle in the eye. He can write about love and death, dump trucks, and the male scrotum - all with wisdom and grace. I’d better not quote the scrotum poem (though it’s wonderful). Here are two other samples. The first was published in Poetry magazine:

The son sits on the bed's edge.
Always the other is tucked in:
the mother who is going to die
that night refuses the son’s
goodnight kiss, thinking the cause
communicable. Thirty years later
the son is there again, suddenly
seeing his daughter as too beautiful
and vulnerable at fourteen
to kiss or touch in this place. The one
not kissed thinks she is bad
or he is angry, feels for no reason
she is dying, or he is dying
and won’t say. 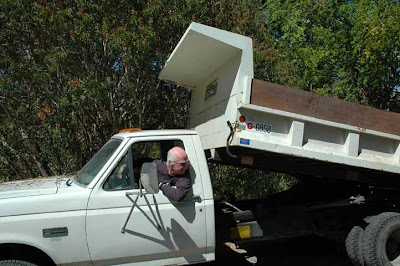 EACH each
EACH each
say the gulls on the trash hill.
I’ve rumbled in here with a dump truck
in the lowest of twelve gears,
disgorged an entire
hundred-year-old kitchen with one lever.
I have read the dimensions a dead
carpenter wrote,
43 x 96,
his crayon still blue
on a splintered redwood stud.
I’ve come here with my wife and child,
raking the over growth of last year’s garden
from a rented red trailer.
I’ve come with a dozen drifter-helpers
over the years,
yanking the remains of old bathrooms,
outdated kitchens, rotted porches,
out of a van.

I have come
in deep winter mud, and when
the trash is blooming
uncontrollably white and yellow
in Spring,
and I have come for myself,
and alone.
I threw our toilet eight feet
over a crushed electric
train set. It toppled
to its eternal reward, bottom up on a
box spring,
then I lofted the vanity sink,
with the hair of people I love still dark
and soaped, stringing
from the drain.

EACH each
EACH each
My father’s keys I’ve kept fifteen years,
to nothing.
His fourteen broken watches.
The knocked-down garage shelves.
A stuffed cotton-shark
with its jaw flapping.
The Apache have a word, Alayah, that means
“changes while flying through air.”

Alayah, Alayah
the lead downspout inserts.
Alayah the pitted faucet escutcheons
that fit nothing else.
Alayah
what I saved to no earthly end,
leftover p-trap compression washers,
random nuts
for emergencies which did not come
in time,
cracked slab of white oak,
bent white cafe-curtain rods with three
jammed hooks, components of every whole
thing no longer whole,
carburetor rebuild kit leftovers,
amputated car radios,
infested red cushions, broken, painted bricks,
spare tire bracket, straps,
flattened, cheap luggage, holding airline ticket stubs
and pennies, and the smells
of perfume,
Alayah,
which I let fly into the untraceable
aura of benzene, skunk, paint,
rot, dissolving cardboard, and bleeding pens.
I go there two days in a row and the stuff
is already plowed under, the road
is plowed under.
The guard has moved his
bench and the portapotty.
Alayah
the dozer itself,
missing a tooth from its toothed wheels, and a blade the size
of a table for ten
shakes and tamps the hill.
Once I left an entire motorcycle
and watched the guy nudge it over almost lovingly with the dozer.
The spokes exploded like soda straws
while the wheels seemed to wobble upright again.
Alayah
It flipped along end for end up the mud hill
for a while, folding one way
and another; the frame wrapped itself
around the motor,
then it tucked itself
under.
Alayah. 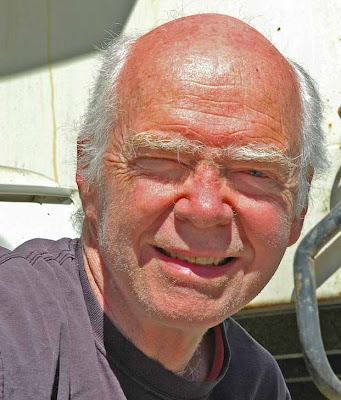 Adam's Ribs can be ordered from Off the Grid Press. If you bring a copy to Terry's cabin, especially if you drive up in an old painted school bus, I bet he'd be happy to sign it. Then he might hand you a shovel and ask for help with the clean-up. Maintaining that cabin, there's always something needs doing.
Posted by Joe Cottonwood at 10:16 AM