Did you enjoy a podcast? How about (blush) a tip for the hardworking podcaster? ----- Or ---- Want to buy an autographed copy of a book? Send an email telling me where to ship it and how to sign it. Then we'll use this PayPal "donate" button to complete the transaction. Email is joecottonwood at gmail dot net.

crossing the cattleguard--
a lone cow studies
how we do it


David LeCount's poetry has been published on tea bottles all over the world.  How many other writers can make that claim? 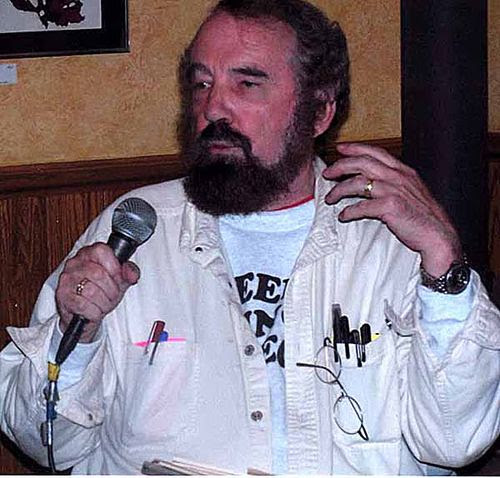 David and his wife Arla have lived in La Honda long enough to raise three children along with horses, pigs, chickens and a Guernsey cow.  David loves milking cows and making butter, but most of all he loves teaching, a profession he has practiced for 40 years.  At one point in his youth, he was considering a career in the Secret Service but chose teaching instead.  He says "It's the best decision I made in my life."  His students would agree.

David grew up in Lagunitas, a small rural town in Marin County not too different from La Honda where his father was a professor and gentleman farmer.  Later he moved to Marin City, a not-so-bucolic town where he says one of his classmates tried to knife the principal, a girl kept a loaded .38 in her desk, and the school was surrounded by concertina wire facing inward—to keep the students from leaving.  With that experience, he says his early teaching assignment in the Ravenswood school district in East Palo Alto didn't frighten him for physical violence, though he felt "terrified" to actually perform as a teacher.  He takes the job seriously.  He says, "I was throwing up for the first six months of teaching."  Apparently his digestive system settled down, and he has taught English at Menlo-Atherton High School and Pescadero High.  He describes teaching as "magical," and says, "I had a wonderful blessed time at Pescadero."


in the rain
the bell
drips into silence

David is adept at languages.  He can dabble in Mandarin Chinese, Spanish, German, French, Greek, Arabic, Swahili, Italian, and a bit of Japanese.  He has now retired from teaching but keeps busy tutoring.  In addition he is leading a "World Travel Club" in which students learn languages and cultures combined with a meal at a restaurant.  Right now the assignment is Egypt, and he would appreciate any tips for a good, cheap Egyptian restaurant.  David went to tiny Deep Springs College in Nevada joining a class of 8 freshmen, followed by the somewhat larger University of Alaska.  Eventually a Creative Writing Fellowship led him to the University of Massachusetts.  He has written two books for teachers of creative writing, Nonstandardized Quests: 500+ Writing Prompts That Matter


blowing moon--
the ghost of the pampas grass
comes to life!

He moved to La Honda in 1977, deciding the town offered "the same things that brought me to Alaska."  It seemed a place where "my kids could collect the eggs" as he had done as a child in Lagunitas.  La Honda, he says, "is heaven for me."  A long-time writer of haiku, he was amazed to discover that J.W. Hackett, a well-known haiku master, was living in the same town.  They soon became friends.


angel gull
out of the salty fog
shadows the sand

David has stacks and stacks of journals he has kept, writing mostly in haiku, tanka, or other poetic forms, rarely in prose.  He is working on an epic poem about the Lakota Sioux. His haiku have been published in various journals and the Christian Science Monitor.  In 1988 he won the Grand Prize, "my equivalent of the Nobel Prize," from the Modern Haiku Society of Japan.  He has spoken at the World Haiku Festival in Amsterdam.  Through his haiku David has made friends and visited them in Romania, Japan, Croatia, Paris.


along the shore
a driftwood fire
hisses salt 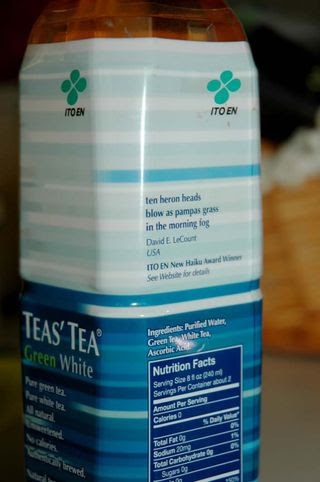 And then there are those bottles of tea.  A bottle of Ito En tea purchased in Japan displays in both Japanese and English script:


into the dusk
the doe's tail
flees its own white

while a bottle of Teas' Tea Green White, purchased at the New Leaf Market in Half Moon Bay, displays the haiku:


Usually appearing with half a dozen pens in his pockets, David has been a reader at Lit Nite, the last-Wednesday-of-the-month celebration of writing at Sullivan's Pub in La Honda, where the haiku combines with beer and wine.  And perhaps a bottle of tea.

the wind shapes
the sand dune
shapes the wind

Posted by Joe Cottonwood at 8:43 PM